First stop on Thursday morning is the mini-market on the way to the metro to buy an umbrella. At €5 it beat the queue touts’ €8-10 and it springs into life at the press of a button unlike their manual ones. A few clouds are about but the sun is out as I descend for not-quite the longest possible metro journey. The A line starts at Battistini one station west of where I get on at Cornelia and stops at Anagnina one stop beyond Cinecitta my destination for today. There’s an amusing occurrence as the subway emerges from tunnels to cross the Tiber on a bridge. On Sunday and again today, the fashionable youth of Rome reach for their sunglasses – for all of thirty seconds! The journey takes a little longer than the concierge predicted – or maybe it was my umbrella stop that screwed the schedule – but I arrived at the gates of the studios at 11:33, presented my voucher and was told that I had missed the 11:30 English language tour but could wait for the 13:00 one in Italian. I declined and said I’d go and see the permanent exhibitions anyway for which you don’t need to be part of a tour.

As I walked across to the building marked Teatro 1 the introduction to Cinecitta, I spied a group emerging from it. I approached and enquired if they were the 11:30 English tour for which I was late and the French group leader Michelle confirmed this, let me join and explained that I’d missed the history of Cinecitta which she had just outlined. She also told me that today’s tour would actually be in English and French because of the make up of the group. This was a very fortunate encounter as she then led our group of twelve through a locked gate into the studio lot proper where casual visitors cannot go.

As you enter the site you walk past ‘Venusia’ a prop used at the beginning of Fellini’s Casanova. Once through the gate we walk along a rough a roadway lined by large terracotta painted buildings each with a Teatro number. Teatro is the Italian equivalent of Stage in English film studio parlance and our first stop, as I try out my new umbrella, is outside Teatro 5 one of 22 in all. I already knew this was their biggest with two submerged tanks for underwater and water surface filming and a massively high ceiling for crane shots. I had also read that Fellini (a favourite from my 1960s film-going days along with Pasolini and Antonioni) held it as his favourite space. I asked whether they had shot the famous scene in La Dolce Vita here in which Anita Ekberg inveigles Marcello Mastroianni to join her in the iconic Trevi Fountain. They hadn’t.  It was apparently shot at 05:30 in February with Mastrioanni demanding a wet suit under his tuxedo while Nordic ice-queen Ekberg strolled through the waters, shoulders bare, in her evening gown. There’s a brass plaque on the wall outside Teatro 5 dedicating it to Fellini who did in fact recreate whole streets in the studio for this and the many other films he made here. 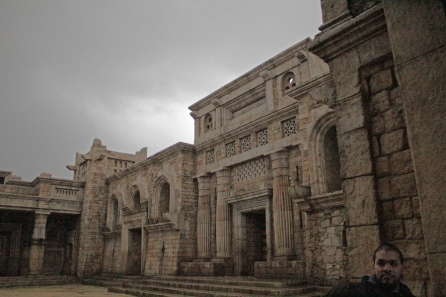 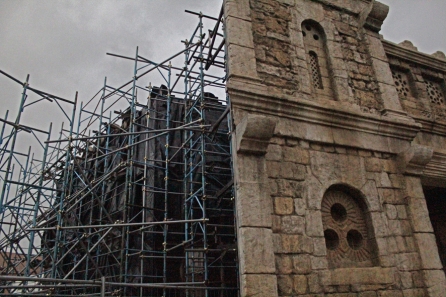 We walk on with quite persistent rain and so observe the first of the outdoor standing lots from under the access arch. It’s a recreation of the Temple of Jerusalem made for an American movie the name of which escaped me between the translations and the patter of rain on the brolly. As with all good set building it’s all scaffolding and fibreglass but looks authentic both to the human eye and the lens. 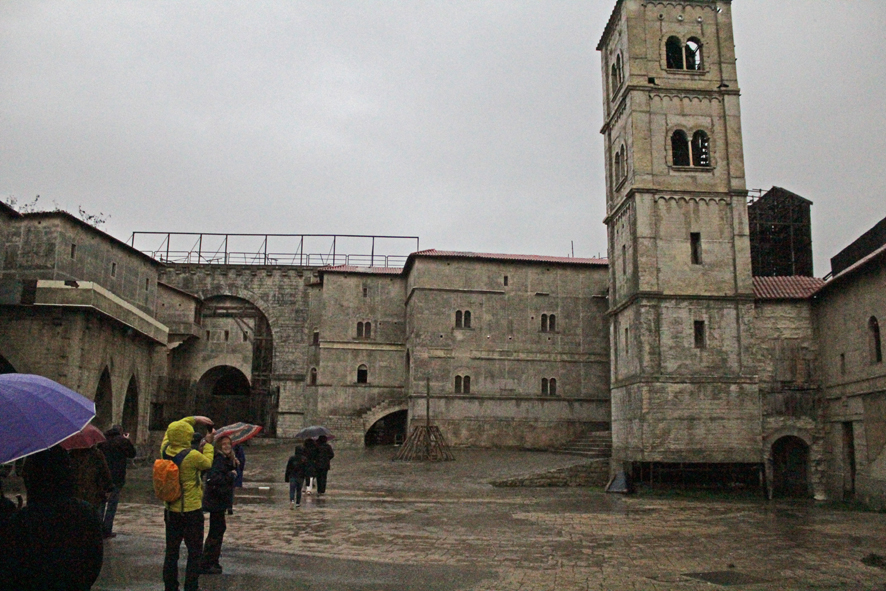 Next to it they are just starting to build an outdoor set for a new film version of Umberto Eco’s Name of the Rose which we weren’t allowed to approach – secrecy or construction hazard I’m not sure. We then move to Assissi built for a film about St Francis but since much adapted to be Florence and other towns in medieval times.

The next big set was built for the recent BBC/HBO/RAI TV series Rome. It has a huge variety of individual homes, official buildings, temples and the forum – sadly the Colisseum is no more. At the side of the forum is the Basilica of Emilia which you can hire for corporate events. Toga party anyone? It was a huge project that cost over a hundred million dollars for each series and the sets will I’m sure be used many more time in the future.

We then walk back to the original exhibition area where I catch up with the history I’d missed. There are great displays – although the text panels are located a knee-height which made for a lot of neighbourly head bumping and ‘mi scusis’. There are excellent interactive segments where you can dub dialogue, make sound effects and perform in your preferred green screen scenario. Hoots of laughter from a group of teenagers running through a series of comedy and sci-fi scenes. There are several screens with interviews and extracts from films by Fellini, Rossellini and a fascinating piece on Sergio Leone’s spaghetti westerns that he sees as retelling of the Greek myths. You walk out through a submarine interior from a 2000 film U571 which had escaped my notice.

The entrance area also has a brilliant children’s play area made up from the letters of Cinecitta.All in all a fascinating morning and I was very glad I’d caught up with the guide.

I took the metro back into the centre and had a short time to spend before a concert I’d booked for 18:30 this evening. So I discovered that Italy is about more than Peroni and Moretti in the birra stakes. In a small bar near Piazza Tritone, home to another famous Bernini fountain, I asked for a beer and was offered three craft bottled beers from a brewery called Baladin at 5, 6.5 and 7.5 proof. Since I want to stay awake I opt for the least alcoholic a crisp IPA style beer that was very tasty. The bar was quiet and I had a conversation about the changes in beer consumption in the last fifteen years or so when Italy started to brew other than the famous lagers we all know. There are over 600 small breweries now and the taste for different flavoured beers is growing. I’ll know to look out for them next time as I did throw my coin in the Trevi Fountain which supposedly guarantees a return to Rome, on my way to Piazza Navona .

I found an old UK pound coin in my camera bag and rather than take it to a bank I cast it to the waters. I hope it’s valid for Roman myths.

I was still half an hour early for the concert so had a quick coffee in a great cafe in the Museo di Roma building at the south of Piazza Navona. It’s called Vivi and is all organic. Coffee was great and being afraid of rumbling tum I had a slide of very tasty morello cherry pastry slice. It was obviously a popular meeting point for the young of the area.

On into Santa Agnesa in Agone right opposite Bernini’s famous Four Rivers Fountain which represents the Danube, the Nile, the Plate and the Ganges with mythical creatures and is topped by a huge obelisk. One of the characters is holding his hand up to shield his eyes from the light but popular Roman tales have it that Bernini had this man shield his eyes from the awful facade of the church built by his greatest rival Borromini. Great story, not true – the church came fifteen years after the fountain but hey – it’s a fun way of explaining the rivalry between the established master and the young pretender both eager to attract sponsorship from popes, princes and patrons.

I enter St Agnes and am directed to the sacristy off to the left rather than a seat in the main church nave. After a fashionable delay our performers file in. Soprano Paola Alonzi explains the music, sets it in context and sings beautifully accompanied by a duo – father Stefano Sabene on traversa (an early flute) tambour and tambourine and his son Lorenzo on baroque guitar and lute. They are not the best I’ve ever heard but in the setting and the circumstances, I was very glad I booked this to be transported back a few centuries. After some Frescobaldi, Monteverdi and – flying the flag for England – a lovely John Dowland piece we were asked to remove ourselves to the main church. The first half had all been secular: dances, love songs and ballads. The second half was church music – so we were allowed into the nave. Actually the acoustics were worse in here but I wondered whether composers (and artists, architects etc) chose different ways of working depending on whether they were producing sacred or profane works. Certainly there was more restraint in the Monteverdi in church than in his previous song. Maybe I’ll see one day if there is any writing about this. 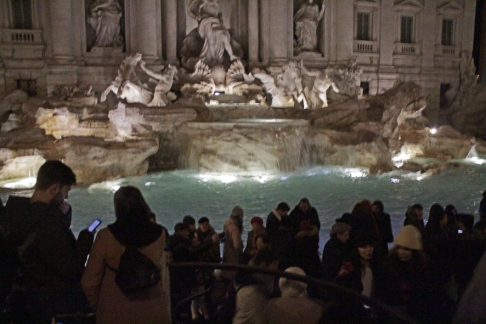 I walked back from the concert past the Trevi fountain and flung in some euros just in case my invalid pound bars me from returning. I looked at several restaurants and was attracted by the option of Ristorante Rossini – what a musical contrast! It proved a good choice with a starter of sauted clams which I’d never seen before. They were in fact steamed like mussels in a white wine and parsley sauce and very tasty. It was also a nod to Dee whose favourite pasta was spaghetti alle vongole. My second course (and last – I’m not Italian) was a delicious lasagne in which the pasta sheets were paper thin and the meat and tomato ragu a little spicy and just what I needed. I was frowned at a little for declining my main course but explained that as an oldie I don’t get as hungry as I used to – thank you Google translate!

Back to the metro, hotel bar for a nightcap and another great day in Rome comes to an end.