We’ll come to that later. Let’s start with the watery workout. Comparison I promised – pond and ocean. Thalassotherapy v hydrotherapy. I have to say that warm sea water with fabulous views over La Concha beach in San Sebastian wins hands down. The Balneari spa was good – a pool with jacuzzis and three different jet massage nozzles, a sauna in which I barely broke sweat and the ghastly Scottish shower – so cold! With wet swimmies I set off after a good breakfast headed for some old haunts. Would they still appeal?

The drive was dull for ten minutes to Cassa de la Selva and then I was in the Gavarras mountains on GI 664. Talk about bends! Up and down switchbacks! Every now and then a voice said, “Slow down Mike!”. Quite right too, not that much came the other way. It’s a road with almost no signs of habitation either – just one sign the whole 20km for Santa Pellaia which might have been a hamlet once but seems just to consist of a small church today. 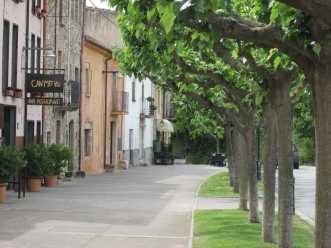 Eventually it flattens out and I arrive at San Sadurni de L’Heura a totally unspoilt old village in which I saw no one on my perambulation – they were all out working in the fields or the chicken coops or indoors cooking and mending although I heard no sounds either. 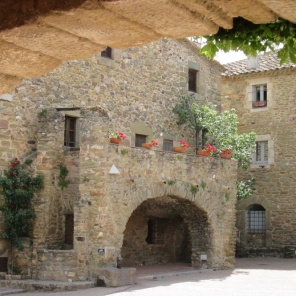 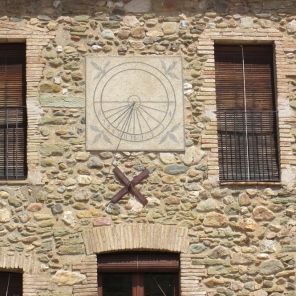 Next stop Monells a slightly over-restored tourist spot but one where we had spent two excellent weeks in a villa with a pool on the outskirts. The sun dial was on BST and the square was alive with swifts, swallows and martins pausing on their way north. Our stay in Monells was the last time either of us got on a bicycle other than in the gym! As I drove up the road we had cycled I saw this and had to stop – my mum loved poppies, memories of the Tower of London display which we’d shared and a medieval Spanish village all together. Hope you’ll indulge me. 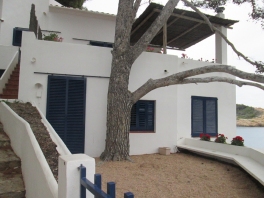 Memories of Dee’s mum hit me then and I made for Sa Tuna where we took Eileen for a break after she’d lost Dee’s dad John. I began then to understand grief. Eileen was good company, very demanding of post boxes to send postcards, but had moments when she didn’t want to talk. This is the house we stayed in for a week.

Once upon a time in a different life I used to own a house in Begur. So I did a drive by to see what my Dutch successors had done with it. It looked terrible – mould climbing up the walls after a wet winter. They obviously hadn’t continued my deal with the local Pintor Rodriguez – he could keep his van in the garage when I wasn’t there and he’d paint the house every spring. Result: fine white house whenever we arrived. Time for lunch in the village which I’m pleased to say still looks beautiful topped by its castle.

However the march of progr – strike that profit has meant that where Dee enjoyed skipping with the local girls and ladies in a communal space, two cafés have invaded with semi-permanent edifices rather than the temporary ice cream stall. Change is inevitable, not all of it good. 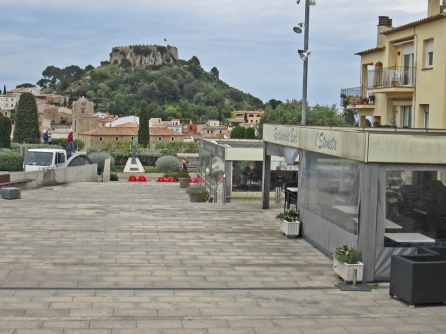 Next stop Toroella de Mongri which is work as it features in the novel I’m continuing next week. It’s famed for its mountains which form the shape of a sleeping woman – they even used on the town signs. 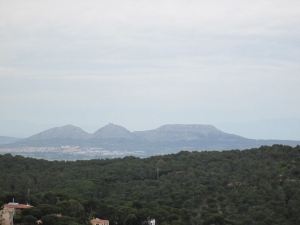 As I drove across the plain it struck me that all the water I’d seen from the air as we flew down the coast on the approach to Girona was the newly planted rice fields. Rice is an important crop here and I’m used to seeing the fields bright green not watery brown waiting for the shoots to appear. I drive into town, park, insert money in the machine which rejects it three times. The instructions are clear and I’m pressing the right buttons. Klutz, duh! You don’t have to pay till 17:00 and it’s ten past four. What an honest machine. I share my stupidity with a lady sweeping the steps of a fabric store who smiled sympathetically. I walked through the lovely old town centre to discover from the Town Hall that the people I need to talk to won’t be in till tomorrow so I’ll have to go back or just wing it – it’s fiction after all.

Toroella is a special place as Dee and I walked to the castle – the nipple on the sleeping lady’s bosom. We phoned and waved to her sister lounging in the campsite far below. Quite a day!

My next stop was intended to be my hotel but on the way came a diversion caused by I know not what. In a 30 car stream everybody did U-turns and sped off on a dirt road so I followed. It gave me just the viewpoint I needed for the novel so if it ever gets published there will be prizes for the spot.

Last night I stayed in what looked like a castle – tonight I am staying in a castle. There was a good deal – early bird – on their website so I went for it. It included dinner for one night and an exciting room in the tower. 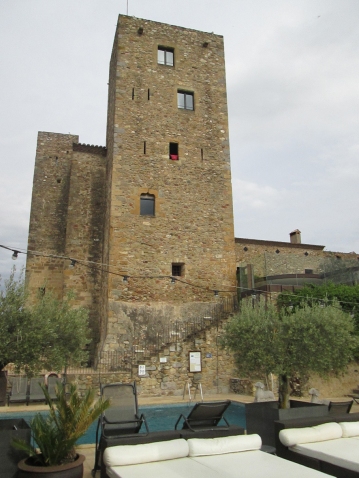 That’s my room with my swimming trunks drying in the window. What do towers have? Lifts? No. Steps? Yes lots of steps – good for the fitness regime I tell myself as I pant to not quite the top. The view is magnificent. Worth it? If I survive two days without heart failure – yes. In fact we came to look at it many years ago when it was still under reconstruction by a Dutch couple who have done a great job in converting it to a boutique hotel.

The dinner was certainly worth it – an interesting take on tuna sashimi served on a thin crispy pizza dough base following a delicious sea bass ceviche amuse bouche. Also interesting to me, who became a bit of an olive oil snob a while back, was a local oil made from a variety I’d never encountered. It was very smooth, almost creamy but with a peppery aftertaste. Now I know my Picual, Arbequina and Hojiblanca but I’d not come across Argudell which Wikipedia – God bless Jimmy Wales and do donate if you can – is native to Catalunya. So a new notch on the olive branch. I also ask for some local wine and Desea is suggested. A strange – to me – mix of Syrah, Cab Sauvignon, Merlot and Carmenere. Very soft, very smooth, very drinkable. So that’s tonight. Thanks to all who are following and saying kind things. I will be back.