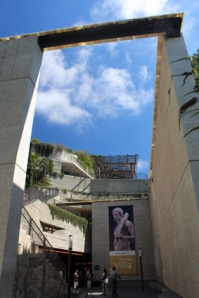 was Getty Day the first of two visits to see how oligarchs with money no object chose to spend it. Interestingly in their later years both Getty and William Randolph Hearst whose castle we planned to visit next day, started talking of their projects in terms of museums rather than just personal indulgences which is how they began. Now they buy baseball and football clubs which don’t leave the same permanent physical identity on the earth’s surface. We went first to the Getty Villa a fanciful reconstruction of a villa from Herculaneum. Its grounds are superb with gardens and courtyards of different kinds surrounding the central palatial building. The centrepiece was a little underwhelming because the ornamental ponds were empty and while blue tiles give some impression of water they don’t reflect like the real thing.

We’d noticed in a few restaurants signs saying that water would only be provided on request. Getting a glass of water the moment you sit down is one of the most enduring and endearing factors of American dining. We discovered that California has been suffering severe drought conditions for four years and so water’s off the menu, fountains don’t play and pools are empty. There’s hope of a visit from El Niño this winter.

The Getty Villa was fascinating to explore with lots of beautiful detail, fine gardens and alongside the mainly Greek and Roman artefacts Getty assembled there was a well curated display on glassmaking in the ancient world. So many ways of making and decorating glass from 400 BC – shapes and colours of amazing variety. Almost worth the visit alone.

And talking of value our entry price of $25 for a vehicle entitled us to free entry to the villa and the Getty Center a few miles away. The museum displays are free thereafter. So we set off for the Getty Center where we park and are hauled up a cliff to its prestigious location in a small train.

Half a dozen buildings spread over the hillside housing works of art, a research centre and there is a formal garden and a sculpture park. We started by having lunch which was OK for institutional catering and then went to see the artworks on display. We were disappointed, probably because we hadn’t sufficiently researched what the collection comprised. Then we went to the photo gallery where an exhibition of Ansel Adams prints was on display – the very same collection that had been at the Royal Maritime Museum in Greenwich last year. They are always a glory to look at and with the prospect of our own Yosemite visit getting ever closer, they took on an extra significance.

Back down in the train, into the car and back to Santa Monica to explore a little. We sauntered along the sea front, looked at the famous pier – struggled with a selfie on the tablet (note the timing to get the helicopter!) – and then had a cocktail in The Ivy at the Shore a fabulous restaurant on the main street. Great service in an elegant setting – perfect.

However the schedule called and we had a reservation for The Hungry Cat at Pacific Palisades recommended very highly by friends whose opinions we respect. With the prospect of a dinner being ruined by the lack of a glass or two of wine we took a cab. The Hungry Cat is nothing to look at outside but is a total delight inside. The food – mostly fish – was excellent, the service from a young LA comedienne most engaging and it was a fine farewell evening to LA before setting off up highway 1 tomorrow. So we didn’t do the tour of the stars’ mansions, we crossed but didn’t walk the Avenue of Stars, we didn’t go into Grauman’s Chinese Theatre or shop in Rodeo Drive thus missing most of LA’s reported top attractions. We saw what we wanted to and realised that three days would never do justice to this monster of a city especially as half of each day is spent sitting in traffic.