Sorry Monteverdi – it was all that baroque last night and then on iTunes while I was writing. Ulysses’ return was a more dramatic story than mine and made for a fine opera we saw a couple of years ago. My return journey began with packing my one carry on bag – first time for a long time I’ve travelled without checked in luggage. Breakfast, checkout, store case with porter and set off to Galleria Borghese for a final cultural treat. The concierge advised the metro to Flaminio and then walk through the lovely Borghese Park. It is sunny and bright, not too cold and I stride off purposefully through the, indeed, lovely park. It dawns on me quite early that to get to the gallery it’s all uphill and nearly two kilometres. The signage is plentiful but confusing as there are several other museums and galleries in the park so the map had to come out a few times to confirm I was on the right path. 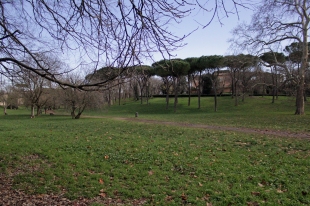 A couple of pauses to watch red squirrels cavorting – why do they look so much more agreeable that the grey vermin I constantly shoo off my bulbs?  – and I make it to the gallery shortly after my timed admission slot from 11:00 till 13:00 – one occasion when I really appreciate the timed-ticket system as it meant I was able to admire the works on display.

The permanent collection houses lots of Berninis but also had a special exhibition showing his work as a painter at which he excelled in his early years and then largely abandoned once commissions for sculpture and architecture filled his days. The first floor sculpture galleries contain pieces from ancient times, mosaic floors of great beauty and loads of Bernini busts in an amazing row through a long gallery. Perhaps the most startling piece is the prone statue of Hermaphroditus from the second century AD, reclining on a mattress sculpted by Bernini which you are sure will respond to your touch. But I was soon headed up the spiral staircase to see the paintings. Fortunately their Caravaggios hadn’t all gone to Florence and David with the Head of Goliath, Boy with a basket of fruit  and others only seen in reproductions were there to marvel at. As indeed were Raphael’s brilliant Lady with a Unicorn (as on trend in 1506 as in 2017), and Deposition of Christ. There was a fine Bernini self-portrait and then Titian’s amazing Sacred and Profane Love which reignited my musings about secular and religious art prompted by last night’s concert. My time was up but I would happily spend another two hours absorbing the works in this elegant setting, where they are so admirably displayed. It was great not being shuffled and squeezed along a toothpaste tube of visitors.

I decided to walk out of the park by a different route clocking a location for another visit, the highly regarded Museum of Modern Art on the way. Its facade was tempting but I did have a flight to catch. I arrive on via Flaminio close to a tram stop for the number 2 that I had used on Wednesday so waited for the next tram to take my tiring limbs back to the metro stop. I looked at my watch and it was exactly 12:25 the time my wife died a year ago. 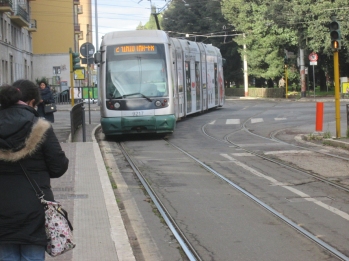 So I had a little moment and resumed my journey on a packed tram. I had time to raise a glass to her in the Piazza del Popolo and found another birra artiginale this time from brewery Beatrice with a pale ale called Diana – all very British royal family! With some complimentary crisps and nuts I was ready for the last leg. I had done very well using metro, trams and a bus and decided to treat myself to a luxury ride to the airport in the hotel’s shuttle bus which proved a good plan as we arrived in good time and I was able to find a seat and write a previous blog.

All good things come to an end and my very enjoyable first taste of Rome ended in anger with the inefficiency of Ryanair’s ground handling subcontractors at Ciampino airport. As this was my first trip for ages without checked baggage, I had paid the extra six euros for priority boarding that enables you to take your wheelie case into the plane. There was no priority line for check in and as I arrived at the top of the steps I was informed that my bag would have to go in the hold. I explained that I had paid for priority simply to be able to place my case in the overhead locker. ‘Well you should have checked in earlier.’ ‘I would have done but having gone to the desk to find there was no Priority Lane I had to join nearly the end of the Other Q, as you so nicely put it to the plebs.’ To be fair a helpful flight attendant did look at a number of lockers but to have removed the bags of non-payers to make way for mine would have delayed the flight so I reluctantly allowed my case to go to the hold and sat down to sulk my way home. Given all the alarms I’d heard about problems at Stansted during the week I guess I was lucky to be coming back at anywhere near the scheduled time. We landed and of course mine was the last case onto the conveyor – fortunately identifiable since no one gave me a baggage claim receipt.

Faith in customer service was refreshed as I arrived at the mid-stay parking exit. When you have pre-booked the gate opens on recognising your number plate. However on Christmas Eve I actually arrived an hour early so it didn’t clock my reg and no one answered the help button so I had to take a ticket. I half-expected to have to pay the price at the exit and then reclaim my costs later but a splendid operator, who did answer the help button this time, checked me on the system and opened the barrier with no charge for my extra hour. A quick run down the M11, a clear Blackwall Tunnel and back home after a stimulating and enjoyable trip. Exhausted but happy and with a welcome home hug from neighbour Jan, who lost her father two days before Christmas.