Will our first day in

Japan be a lot of fun

or will we just sleep?

Riding the Narita Express is a very pleasant experience – comfortable, a trolley drinks service and train attendants who bow as they enter or leave every compartment (or coach as the announcements have it) whether there are passengers within or not. It’s strange to our eyes and minds and  gives us an insight into the fact that for all it’s modernity Japan still retains some hard-wired traditions. There are news and weather updates on the flat screens at the front of each coach with very useful journey information as well as lots of ads of course. But Express is a bit of a generous appellation in my book. We left Narita at 10:48 and got to Shinjuku at 12:08 so an hour and twenty minutes for 50 miles seems less than arrow let alone bullet speed.

Just before we left we watched a documentary made by a friend’s company called “Shinjuku – the world’s busiest train station”. It was fascinating and just about prepared us for the warren of bemused foreigners (us included) and thousands of purposefully striding locals on their lunch breaks that met us. Finding an exit that would would lead to a taxi rank all the while struggling with our four suitcases remember, involved two lift rides, an escalator and a false exit before we found it at last. Again one had been somewhat forewarned but to get into a spotless very boxy vehicle – maintenance is obviously brilliant as all the cabs we’ve seen look very old models – and find lacy antimacassars and seat backs and the driver in white gloves. Oh I’ve got some suggestions for the black cab fraternity and their minicab competitors! The stern lady at Narita Express tickets had suggested we should expect to pay between ¥1000 and ¥2000 depending on traffic conditions. Well they must have been superb since the fare was ¥710 and tips are not expected in Japan.

We couldn’t check into our hotel until three o ‘clock so we deposited our bags in what wouldn’t have disgraced the lost luggage at Baker Street – clearly hundreds of people arrive on early flights and can’t check in till later. So we set off in quest of first some lunch and then Murakami’s new book.

We walked around the immediate area looking at plasticized menu pictures of strange combinations and eventually settled on a 24-hour self-service place where we could choose our own food – and the two large, very much needed beers you see. It proved all rather Murakami as the staff were constantly screaming – pleasantries and encouragement I hope – at each other and then I looked out of the window and saw this.

It transpired that they were “The Shinjuku Robots” parading the streets on a float to publicize a forthcoming Shinjuku event. However in the middle of a day with no sleep it was food for thought. I’m sorry I hadn’t time to rush out and get a front on view but the traffic lights don’t wait that long.

But lunch was long enough to get us into the room, have a shower and then set off in search of news of Muarakami’s new book. Now the room – I recall a congratulatory post that we’d booked our first room for only £65 a night. Well it’s fine – the hotel is very well located, the lift works and for once we are not in the room furthest from it. However it might be a good place for Nakata (a character in Kafka on the Shore) to talk to or even interrogate cats but he certainly couldn’t swing one. However it’s fine for two nights, provides an extensive range of toiletries and towels and a yukata and slippers for each of us.

Refreshed we set off and walk towards where I think Kinokunia Bookstore should be. Passing a small shrine, a baseball batting cage like a gold driving range and several young ladies who start to offer me cards until they see Dee and hastily recover their doorway stations, we find Kinokunia, confirm publication at 08:00 on 12 April and suggest there will be a queue of about 80 waiting to get the latest Haruki fix. We’ll be there, sporting a unique 1Q84 tee shirt gained at the London launch of that book.

Making our way back to the hotel we encounter a delightful elderly gentlemen who asks us where we come from, is amazed at the length and breadth of our trip and offers helpful suggestions for good things to see in the area. We were at one of these, the Hanazomon Shrine, an oasis of peace in the midst of hectic, trendy Shinjuku. Through the line of torii in the right hand picture if you look carefully you can see at the end the gold fascia lettering of Emporio Armani – a real god meets mammon moment. It surprised me thirty years ago to see people come from their offices wash themselves ritually and go and stand before the shrine, say a few words of prayer and clap their hands to ensure their prayers were heard. I find it amazing today. 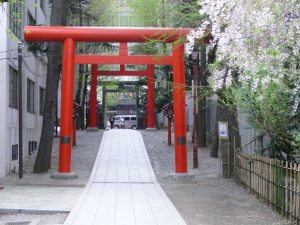 Sated with spiritualism we then moved off into the heart of Shinjuku’s “entertainment district”. Never has so much neon been burned in attracting people to spend their money. It’s truly amazing. We walked the streets, wondering at the large amounts of hanging about on street corners by both young men and women – some were certainly trying to get us to dine at their establishment but probably not all of them. However, resisting their blandishments we chose a bar of our own liking, had a couple of beers as many of Murakami’s characters do in this part of town and then went off for dinner. But not before exchanging meishi and becoming lifelong friends. 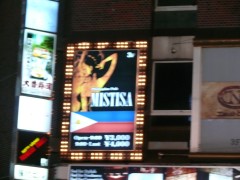 Then back to the hotel via an interesting punch in the number to select your dish, pay in advance diner which was actually rather good and then to bed for one of us and to blog writing for the other, the results of which you know. It’s midnight again and we have to be up early to be in the queue at Kinokunia, so sayonara and Thursday’s news will have to wait until tomorrow.