Just one more day in

the Kansai before we go

north. Will it suffice?

The one thing we’ve noted in our travels in the Kansai region – the mid section of Honshu Island – is that it’s a continuously built up area. It took half an hour to get from Kobe to Osaka and the train was going on to Kyoto in another half hour. We whizz through station after station with commuters in their neat rows waiting to board the local trains. Such a mass of humanity everywhere. We began the day with a final walk around Kobe including a visit to Daimaru Department Store. A memory from thirty years ago is of smartly dressed young people, mostly young ladies, greeting you to the store with genuine pleasure. They still exist with perhaps slightly updated uniforms and greet you with the same degree of enthusiasm. The top and bottom of ten floor Daimaru were real revelations. On top of the store is a garden and a garden centre. It’s a great space with views over the city. The bottom floor is the food hall of such immense scale and variety that you could browse all day, stopping occasionally for fresh drinks and snacks from the counters that pop up every now and then. It was good to see Fortnum & Mason and Daylesford Organics flying the flag in the midst of the oriental delights that abound.

Arrival in Osaka was uneventful until we took a taxi to the hotel. We had the address written down but finally we had to resort to my suggestion that he use the phone number we also had. This worked – the hotel had changed its name – and we were able to get into our room ahead of check-in time at three, something we’ve been really lucky with. We planned to go to the National Art Museum to see if we could see any other prints by Kenji Ushiku who made the etchings I’d bought 30 years before. We asked the front desk for directions and they suggested a cab and wrote directions for us to give to the driver. We arrived at the back end of the building – is SatNav Lady interfering with other drivers too? – and found our way to the entrance under increasingly black skies. It was very hot when we arrived and I’d gone out in only a polo shirt which was now inadequate as the winds got up, thunder rolled and rain started to fall. Sadly the permanent display has been suspended for a Picasso exhibition and a seasonal Painters of the Kansai show. So no go on the print front. As we’re quite close we decide to go to Osaka Station to check our departure times for Tokyo tomorrow. We managed to achieve the walk of about a mile entirely underground, thus avoiding a soaking.

There was an astonishing amount of activity around the station, with TV cameras and crowd control in full swing Japanese style, which we found was due to the opening of Grand Front Osaka a huge nine-floor, vertical mall with offices, a hotel, 260 shops and many food outlets. It’s branded as “a new city centre” and they are expecting 25 million visitors in the first year. We approached, wavered and did not enter. Scary shoppers, megaphone toting security and the crowds made us think better of it – it was Bluewater at Christmas x 10. Judge for yourselves if we were right. We went instead into the, now deserted and peaceful, Isetan store with the intention of buying a jumper or light jacket for me but the prices made me wince more than the cold so we just took lunch on the top floor.

On leaving the new Osaka Station City area after our rather late tempura lunch cooked lovingly in front of us on the top floor of Isetan department store, we set off on the JR City Loop train to explore. We were approached on the platform by a diminutive lady who wanted to practise her English and presented us with an origami bird as a gift. We got on a train with her – going in the wrong direction as it happened and were regaled with the highlights of her language acquisition method. She had meticulous, cursive handwriting in an exercise book. It was crammed with lyrics of popular songs – many of them karaoke favourites. It clearly worked for her. After two stops we apologised and went back round the loop the other way, failing to find the area we wanted and retired via subway to the hotel. With a late lunch and mid-trip exhaustion we decided to have a rest, go out and have a few drinks and maybe a small snack and then have an early night. Phwoomp – art frustration, thunderstorms, cold and tiredness had me wondering whether coming to Osaka was such a good move after all.

Our early night was dramatically interrupted by what we correctly assumed was a fire alarm at about eleven and it was only after about ten minutes of yukata-clad peering along the corridor to see other confused guests wondering what was going on. It was ten minutes before reception managed a tannoy in English – after Dee had phoned to enquire whether they could tell us what was happening – to the effect that it was a false alarm, the alarm had been tripped accidentally and not to worry. Reassured, we were prevented from further sleep by an insistent, recorded message that the staff had obviously switched on but couldn’t stop. Annoyingly, despite hearing it at least 200 times we still couldn’t make out the words due to an echo in the system. Finally it stopped and we crashed.

Saturday morning Osaka was a far more encouraging place with bright warm sun and a bit of a breeze and the news that Watford beat Leicester away 2-1 – highly energising. We set off to explore an old style shopping street – 2.6 kilometres of Tenjimbashi-suji. It was brilliant. A chemist provided much needed hairspray, toothpaste and plasters – way too much walking! The best array of knives in one shop, cooking implements, fresh fruit and vegetable stalls lined the street in a dazzling and comforting, human display. Grand Front may be for some but this is what we came for. At the bottom end – we didn’t do all its length, shame on us – we visited an appropriate shrine that celebrates the gods of learning and the arts. Temmangu was one of the most interesting shrines we’ve visited with many small areas for private devotion, several child blessing ceremonies and, quote the hon scribe “lots of wedding ceremonies today”. 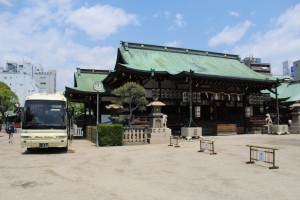 After a refreshing coffee in a small coffee house opposite the shrine, we went to the Nakanoshima Park which is on an island between two branches of the river Dojimagawa. It was lovely to find rose gardens, picnic tables, recreation areas and space surrounded by the high rise of Osaka downtown. It took us back to the Esplanade by the Charles River in Boston. There were several groups of people sketching under the supervision of  a tutor, others doing group exercises. No time for loitering though with a three o’clock departure for Tokyo. Next stop was Namba Walk a modern underground mall which contrasted starkly with the atmosphere of Tenjimbashi-suji. You know which I prefer. However at the end of Namba Walk we arrived at Namba Gardens a truly stunning shopping mall and cinema complex famed for its high level gardens and views over the city. It was an incredible structure and worth the visit. It was also, as everywhere there are shops has been, rammed with people carrying bags with purchases not just window shopping. So maybe the latest round of quantative easing of the yen recently introduced is working. Note to Mr Osborne perhaps.

Hotel, luggage, taxi, Shinosaka Station to take our first big Shinkansen trip – 3 hours to Tokyo via Kyoto, Maibara, Gifu and Yokohama. A box lunch at the station to eat on the train and an altogether more interesting ride with the ability to see landscape and cities whoosh by. As we took bends at high speed the tilt of the train was very noticeable with, on occasion, only water visible through one window and sky through the other. My geography lessons at school led me to believe that Japan was all mountains with extremely narrow coastal plains. Either the books were wrong or tectonics have achieved a lot in 45 years. Some of the stretches we covered were as flat as the proverbial pancake for as far as the eye could see.

We arrived at Tokyo Station made the transfer to Ueno Station from which trains go to the north via Tokyo’s excellent Yamanote Loop line and after some confusion found our train bound for Hakodate. We were surprised to be met by a mass of paparazzi, kids with large Nikons and Canons and an atmosphere of something special. Now we know our blog is reaching a large audience but this did take us by surprise. What happened next is another story …