Oh the joys of eating in 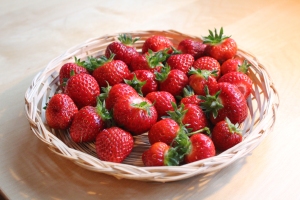 It was while picking these beauties in the garden last night that I recalled that we had been in Japan at the peak of their strawberry season and had enjoyed many while we were there. It also brought to mind a delicious dessert at a London restaurant and so after a rather busy period of proper work I thought I’d share a few more random thoughts about Japanese food in London.

During our planning for the trip we received some very good advice from a friend who knows Kyoto very well: “Do not miss out on the okonomiyaki in Kyoto,” she emailed. “You really need to fill up on this most fabulously umami creation on the planet.” Well we didn’t miss out and were not disappointed in a small restaurant, Kyo-Chabana, not far from Kyoto Station. We were extremely pleased to discover that okonomiyaki is available in London at Abeno in Museum Street and Abeno Too in Great Newport Street very convenient for us after seeing Britten’s opera Death in Venice  at the Coliseum. We had already decided to we decided to keep it simple with a starter of summer vegetable tempura while the okonomiyaki cooked. It proved a good choice. Since coming back from Japan we’ve been very disappointed with the tempura batter in many restaurants. It’s often too soggy, too heavy and spoils the taste of the vegetables or seafood it envelops. But at Abeno Too the batter was crisp and light around delicious asparagus, edamame , cherry tomatoes, onion and broccoli.

The Abenos claim on their joint website to be the only authentic okonomiyaki restaurant in Europe and in our limited experience it may be a fair claim. Our young server/chef arrived with a bowl containing the batter, eggs, dashi and cabbage that form the base of the dish which she mixed up and poured and shaped into a disc on the teppan hotplate in front of us on the counter. We had decided on the Kiso mix from the dozen or so variants on the menu so we had bacon, mushrooms, cheese and lotus root as the other elements bubbling away on the grill. In some restaurants they bring ingredients for you to cook yourself but here it was expertly cooked for us. It takes about ten minutes including a mid-cook flip to have it thoroughly cooked and then mayonnaise, okonomiyaki sauce – a sticky brown tangy concoction – ginger and bonito flakes are added to the top. The bonito flakes curl and waft in the heat in the most fascinating way that makes you almost forget to eat.

We didn’t forget though and just as well – it was delicious and we had to have a little sake – served in traditional wooden boxes – to provide the full Japanese taste experience. Neither of us is a great fan of desserts but had been very impressed by ice cream in Japan so I was seduced by the maccha– green tea ice cream – so refreshing – and Dee by a kinkakuji from the summer specials menu. This was a box of sake jelly with a strawberry (see above) embedded in it and gold leaf on the surface with a mouthful of azuki bean jam filled doughnut on a cocktail umbrella. We shared and were both amazed by the delicate flavours and the elegant presentation.  A great evening of Japanese tastes just off St Martin’s Lane.

We also had fun making our own wakame, prawn and cucumber salad for a competition run by the Japan National Tourist Office (no there’s no link this time as WE want to win it). Here’s what it looked like and it was a subtle blend of flavours which we think were enhanced by our addition of the ever so on trend pea shoots as garnish. With a little sake in the Bizen pottery cup which was a gift to us from Mr Yamamoto at the Hotel Koraku in Okayama it made for very pleasing starter.

Earlier in June we had a chance to catch up and share impressions with a good friend who visited Japan a couple of years ago at the elegant Watatsumi on Northumberland Avenue. We’ve been there a number of times before but were able to introduce Ilse to its delights. They serve superb food and also some excellent cocktails especially their Japanese fusion cocktails. The “small nibble” dishes of edamame, crispy spicy calamari and baby prawn tempura made for excellent tapas style sharing dishes and we followed it with their mixed vegetable tempura where the actual vegetables will vary with the season but are in a light batter with a very tasty dipping sauce. The restaurant is in an old banking hall with high intricately plastered ceilings and makes for a relaxing and peaceful atmosphere in which to share food and conversation.

So June was a good month with Japanese food made at home on several occasions – a particular hit were some salmon, prawn and wakame fishcakes with tangy ponzu sauce – and eaten out on five evenings which included one old favourite and what we are sure will become a new one and three others that were OK but not special. And in July we have HyperJapan to look forward too – our tickets have arrived and we are contemplating a feast of Japanese food and culture. We are also hoping to get to Leandro Erlich’s Dalston House installation – we loved his swimming pool in Kanazawa and the London project looks great fun too.

Now back to work.