Don’t you all think the

always meant to be?

What brilliant news that the Olympic Games in 2020 are going to Tokyo. Great bid, brilliant city and a wonderful UFO from Zaha Hadid to come. While we were there we saw lots of publicity for Tokyo’s bid with banners all over the city, on the streets, in parks and not surprisingly draped from the Tokyo Metropolitan Government Building. 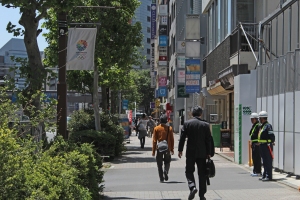 Below: On lamp posts all over the city

Congratulations also to Tokyo for selecting the best logo of the three candidate cities. It was designed by Ai Shimamine a fourth year student at Joshibi University of Art and Design in the west of Tokyo. She won a competition arranged by the bid committee which attracted 38 entries. Her design features a wreath of cherry blossom flowers in the Olympic colours. We all know how important cherry blossom is to the Japanese people and Ai’s logo signifies “eternity, happiness and a continuous unbroken cycle, while also symbolizing Japan’s recovery from the March 11 earthquake and tsunami”.

I bought a tee shirt and Dee a badge when we visited the Tokyo Metropolitan Government Centre. The badge is on Dee’s ubiquitous pink bag and I wore my tee shirt as a good omen to the Olympic Park Anniversary Games in London back in July (logo obscured by Go Peacock sign sadly) where we also rooted strongly for Mami Sato the paralympic long jumper who comes from Fukushima and was an ambassador with the bid team in Buenos Aires. She described how 200 athletes had visited thousands of children in the Fukushima area and enthused them with a passion for sport.

Extensive existing facilities, fun and legacy were the cornerstones of the Tokyo bid and of course the Prime Minister Shinzo Abe – “he gets everywhere” commented one friend in Tokyo when he threw first pitch at a baseball game – lived up to his reputation by jetting from St Petersburg at the G20 to Buenos Aires to reassure the IOC that pollution from Fukushima has not and will not affect Tokyo.

So we’ll be applying for volunteer jobs to show English speaking tourists around the Games in 2020 and share our enthusiasm for Japan with anybody who will listen.