can we visit Pizzo

and not eat pizza?

We’ve had a great time, quiet, nine mainly sunny days by the pool. Eating at home because everywhere else means one of us not having a drink so as to drive home along the roads that cry out “mind the eggs”. But we’ve eaten well on local produce and drunk well on local Ciro wines. There have been a few moments of thunder and a couple of quick downpours but on the whole it was just what we needed. There was a well designed garden area with a stone bench that reminded us of Japan and lots of lizards and a few geckos for company. 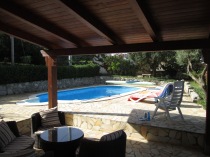 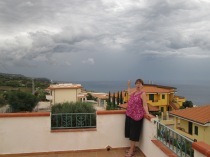 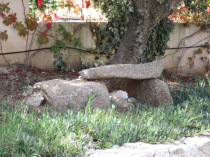 So we leave our villa today passing what was maligned in a previous post as a wayside fruit stand. It is of course a full blown supermarket with everything we could have wanted and had we looked harder we could probably have avoided our fraught trip to Vibo Valentia last Sunday. 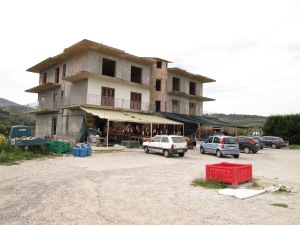 We are going to spend the day and night in another town up the Calabrian coast called Pizzo. We’ve booked into the hotel for one night and reminiscent of early arrivals in Japan earlier this year we have expectations of leaving baggage at the hotel and wandering about until official check in time at 15:30. Pizzo is a warren of undulating winding streets but eventually we hit a free parking space in Piazza Mussolino (note the last vowel) which is walkable to the hotel. However we arrive – sensibly deciding not to take our bags – to find the front door open but a sliding glass door impenetrable. We ring the bell. Niente. We walk about and knock on windows. Niente.  We telephone and leave a message on the voicemail and so to the Piazza della Repubblica for a coffee. We’ve not quite ordered when the hotel phones and says we can come now. So we apologize to the patrone, head back to the car and pick up out bags and wheel them along a street of roadworks to the hotel.

Magic! Our room is ready. The hotel is beautiful. The staff are apologetic – they were serving breakfast on the roof terrace and couldn’t get the door – sounds good for tomorrow as breakfast’s included. It’s called the Piccolo Grand Hotel and it’s a perfect description. It has all the elegance and style of a grand hotel but in a converted palazzo that only has 12 rooms.

We ask about parking and are advised that we are best where we are and set off to park up for the day as there’s not much call for driving in Pizzo. 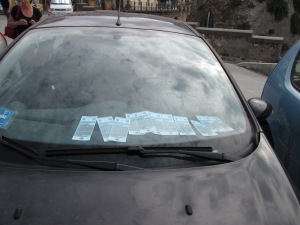 Now you can only buy parking by the hour on a card on which you scratch out the year, day, hour and minute on a foil covered card. And you can only buy cards by the hour. So having decided to stay put we need ten of them at 50 cents each so we sit and scratch and display the whole array in the windscreen. They say it’s OK in the tabacchi where we buy the cards – we’ll see tomorrow if there was a hidden sign saying “No return within one hour”.

Hey ho coffee calls. Il Patrone is pleased and maybe surprised to see us back but we have good coffee and a chocolate croissant for breakfast before exploring the town. 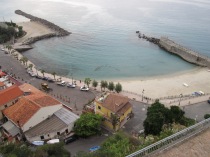 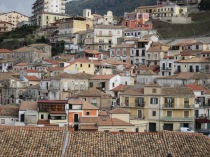 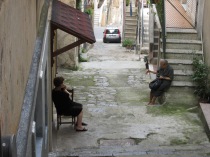 It is a pleasant place with some nice churches, grand – if rather run-down – palazzi and wonderful views of the sea from narrow, angled street corners. The area is famed for its liquorice so we buy a few packs to take home for offices and friends as well as some limoncello flavoured biscuits we think will go down nicely for Friday treats. We go for a prosecco and a beer in the main square before meeting Beata to give her the keys and retrieve our breakages deposit. She arrives, flustered and with many other visitors to attend to and we decide on a local produce shop-cum-restaurant Le Chicche di Calabria for lunch. What a good choice! 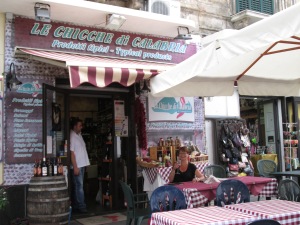 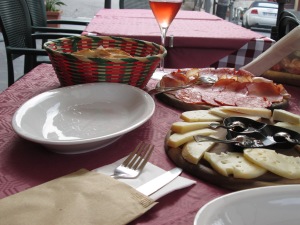 We had the Calabrian tasting menu which kept coming – a plate of four or five different cheeses, then a platter of salamis some mild, most quite fiery. For the first time we were presented with our cutlery and napkins in a paper bag. These first courses were the precursor to four bruchettas again two tomato-eyd  and the others really hot with the chillies they love so much down in the south. Finally there was the steak – almost a comparable tenderness to the Hida beef we’d tasted in Japan earlier this year. Accompanied by a rosato wine from Ciro region just to the north and finished off with coffee it was an excellent way to spend several hours. We buy a few more bits and pieces from the shop and when we decline a large bottle of local liquorice liqueur our explanation “Ryanair” is greeted with a sage nod of acceptance. Their meagre baggage allowances go before them everywhere it seems. We retired to the hotel which has a lovely small roof terrace for some embroidery in Dee’s case and some reading in mine.

One of the great things about this static, relaxing holiday is that for the first time in ages we’ve been able to read all six of the Booker Prize shortlist – well nearly as according to Kindle I’m 18% through the sixth. For what it’s worth here are some brief observations in order of reading just before the winner is announced:

Ruth Ozeki A tale for the time being A bias has to be admitted because it deals with Japan and Canada in both of which I have an interest but it’s an imaginative look at post-tsunami Japan with further insights into zen and the Japanese character. The writing is not always quite as balanced as I would have liked but it was a compelling read.

Colm Toibin The Testament of Mary My winner by a short head. A beautifully crafted novel with a vivid sense of period and the politics of the birth of Christianity. A stunning concept brilliantly delivered.

NoViolet Bulawayo We need new names Startling and distressing but compelling and for me at least very educational, her stories of kids growing up in Zimbabwe are fresh and have an authentic feel. I found some of the US-set chapters a little less well done but it’s a book I’m very glad to have read.

Jhumpa Lahiri Lowland Again I was always going to enjoy the next book from a writer I already admire and with its settings in Kolkata and New England another two of my interests were featured. A heartbreaking series of stories unfold from her silky pen and I loved it.

Jim Crace Harvest How have I gone all these years without reading Crace? This is my second favourite – unusual for me in that it’s historical again set around the time of the enclosures but it’s love of the land, the politics of medieval poverty and the restless energy of the characters made this a wonderful introduction to an author who will be the subject of multiple downloads soon.

Eleanor Catton The Luminaries This will win because I can’t stand it. I must be the one person in the world who just can’t do Hilary Mantel’s Cromwell offerings which have twice won the Booker and this over-researched, over-written introduction to intrigue in New Zealand’s gold rush falls into the same category. The fastidiousness of the writing with immense effort to achieve a sense of “written at the time” I find very alienating. It leaves me completely frustrated with its lack of energy and I can’t say now that I’ll even bother to finish it. So put your money on this one and ignore my opinions above. 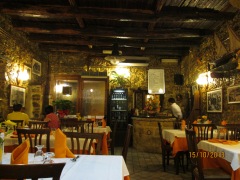 We had been told by several people that La Lampara was the best restaurant in Pizzo and the helpful staff at the hotel called ahead to make sure we could get a table as it is a) small and b) popular. It was great with a shared starter of smoked tuna followed by ricciola for Dee and swordfish for me so we had sampled the three fish the area’s most famous for. Wine choice not brilliant, a not quite dry enough local white but a very pleasant evening in excellent surroundings before retiring to the hotel to blog and discover that England had managed to qualify for the World Cup.

Next morning dawned very wetly. A veritable stream flowed by the hotel’s front door and it was impossible to distinguish sea from land from sky as everything was a uniform grey. Good preparation for our return to London. 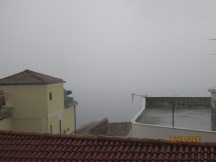 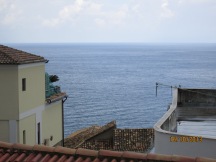 2 thoughts on “Pizzo and beyond”