Saturday morning dawned bright and sunny again. We got up early and hiked across the beach so hat we could say we had at least paddled in the Pacific. We couldn’t get the car out of the parking lot until 9 anyway so it seemed a good way to start the day. Already the joggers, serious runners, skateboarders and rollerbladers were hard at work enjoying the sun before it got too hot. It rose to around 95 Fahrenheit while we were there. 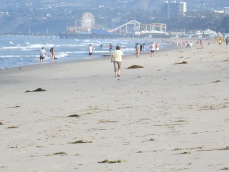 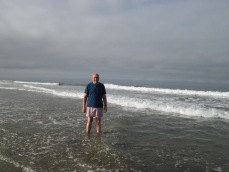 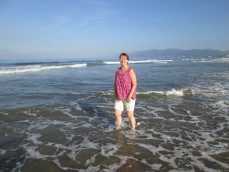 We retrieved the car and we drove pretty easily for once up the Pacific Coast Highway stopping off in beautiful Santa Barbara for breakfast. We didn’t have time to explore but it looks a really lovely city from what we could see as we drove around looking to fill up with petrol as we’d been warned that opportunities to do so are sparse on the way up Highway 1. This proved a bit of a mission as when I inserted my credit card – we knew all gas must be prepaid – and was prompted to enter a five digit zip code it spat out the card with INVALID DATA flashing on the screen. So I had to enter the shop, give them my credit card, go back out and fill up and then go in and sign for the total. Pumps are slow so the whole operation took about twenty minutes.

The road north became more open and vistas presented themselves frequently to the eye and not just at the places to pull off the road helpfully marked “Vista Point”. 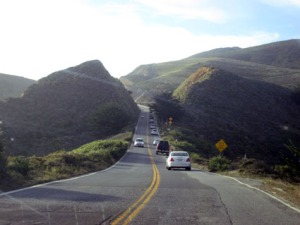 We were aiming to get to San Simeon to visit Hearst Castle around early afternoon which is exactly what we achieved. The castle is so popular that tickets are issued for timed entry only and have a strictly guided tour of the main rooms and you are then free to wander in the grounds. Hearst was a newspaper baron who inherited quite a lot of wealth from his silver mine owning prospector father. They used to camp on a hilltop site overlooking Monterey Bay during William’s childhood and when inheritance allowed him to indulge his whim he determined to build a fanciful, eclectic palace on the hilltop. No recreations of ancient styles for him and his architect Julia Morgan. Hearst’s brief was to build a castle which would incorporate architectural items and works of art he’d acquired since getting a taste for such things on a Grand Tour of Europe with his mother when he was a boy. In itself it is fun, eclectic, grandiose.

What is staggering that it is six miles from the nearest road up a steep hill – well mountain to be fair. You can see the coast behind me and the ascent is quite a switchback. The first task was to make a road so that materials could reach it. He nearly went bust several times while building progressed but finally his fairy tale came true – he did build a castle in the sky. Some of the effect was lost because the massive outdoor pool was drained for the drought but we had a fine time marvelling at the scenes that must have unfolded as Hearst entertained the great and the good of the 1930s and 40s. What we do know from an excellent introductory film is that he ran his empire from his dream castle with a pilot collecting all the company’s newspapers each day so The Chief could check on his operations. The same airstrip served to fly in party people from all over who clearly had great fun being richly entertained in sumptuous salons, heraldic dining hall with games rooms and a cinema for afters. 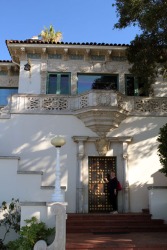 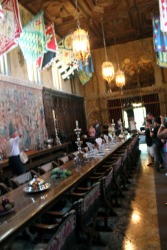 They stayed in cottages like this one and had to assemble in the hall for preprandial drinks. 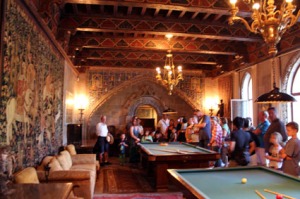 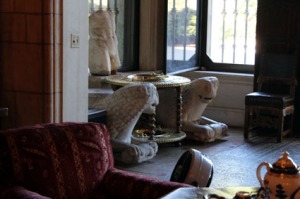 Perhaps the most amazing sight was the roman pool – a blue and gold mosaic multi-room affair which we visited shortly before taking the bus back down the mountain.

Back in San Simeon we had a dip in a rather more modest pool at the Morgan Hotel which had comfortable, spacious rooms and was named for Hearst’s architect Julia Morgan and had an array of prints of her designs for the castle displayed on its walls. Dining options in San Simeon are limited and we should probably have followed several other guests in driving back to the somewhat larger Cambria four miles back down the coast.