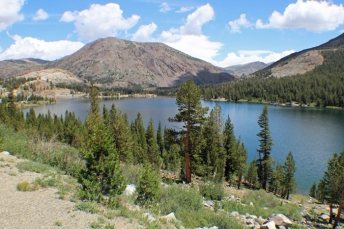 We decided not to go back into the valley next day but to drive the Tioga Pass eastwards through the sierra. It is an amazing road but not for the fainthearted. It is very mountainous with twisting roads, vertical drops of 2000 feet with no Armco or stone barriers – just my kind of drive except for two twenty minute hold ups for road works which made the already narrow road single track and short bursts of alternate flow didn’t seem to be on the agenda. I think the 4×4 just in front of us were contemplating getting out their portable BBQ at one point! 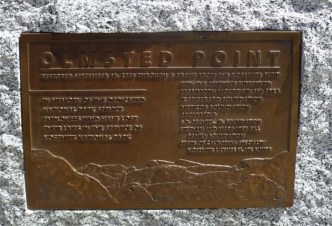 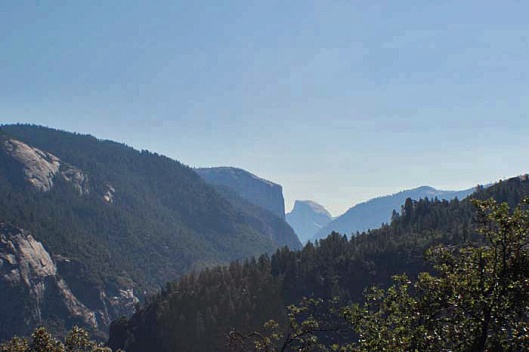 As we travelled on passing Tioga Lake, Tuolumne Meadows and Olmsted Point the out-turn that gives a great view of the Half Dome from the east we were very pleased with our decision.  As we paused there we thought of our trip to Walden Pond with Pat and Joe. Joe is an expert on and admirer of Olmsted who as well as co-designing Central Park in New York and the “Emerald Necklace” of green spaces round Boston was one of the architects of the national parks movement. Route 120 which is the Tioga Pass Road is the highest paved road in the US apparently and is closed from November to May each year so we felt privileged to enjoy this true wilderness, much as we had in Shikoku and Hokkaido last year. To be so far from any signs of habitation, enjoying fabulous views and the sounds of wind in the forest, birds overhead in beautiful sunny conditions was just great.

We exited the road at Lee Vining on the shores of the weird Mono Lake which appears to have a significant number of clones of Lot’s Wife. It is a saline lake and the accumulation of salt rises up in tall pillars a bit like outdoor stalagmites. We had a lunch stop at the gas station and rest stop which was fine and took the decision to turn left and go north on the interstate 395 and then head west and back to San Francisco on the 108 through the northern sierra as an alternative to retracing our steps via Merced.

Good decision or bad decision? Probably the proverbial curate’s egg. As we swung off the sun-drenched interstate and started the climb towards the mountains we noticed the temperature drop (despite A/C in the car) quite dramatically, wondered why the blue sky was now jet black and were soon in the middle of the mother of all thunderstorms.

It only lasted about twenty minutes but was really scary. No other vehicles in sight, a twisty mountain road narrower than the Tioga Pass Road of the morning and torrential rain with sky-splitting forks of lightning – even I had to admit these weren’t the happiest moments of driving in my life. However we soon made our way to a high pass which acted as a sort of celestial watershed returning us to the sunny blue side of the mountain and leaving all that black wet stuff behind.

The drive was if anything more spectacular. Massive forests including the Stanislaus State Forest with isolated shacks, sudden flower strewn meadows, streams and lakes, the occasional camp and adventure centre and certainly no road works and the weather stayed good throughout the rest of the route apart from a quick shower as we entered Stanislaus. Route 4 crosses the Sierra Nevada through Ebbett’s Pass which as you can see is quite high up. This road is again usually closed from November to May because of snow. All the words that can be used to describe landscapes of this magnificence have become clichéd. So I’ll just say that we both descended from the sierra feeling refreshed, rejuvenated by the experience and extremely glad we turned left not right. 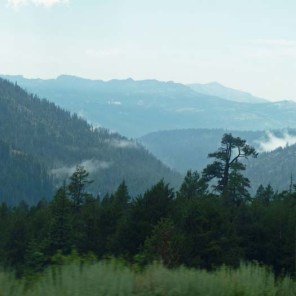 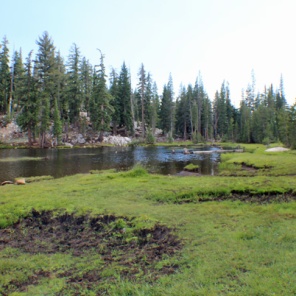 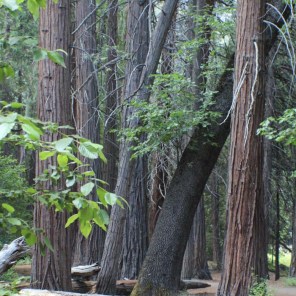 The SatNav decided on a rather unusual route back to San Francisco which involved a tour through the suburbs of Modesto before getting us back on the 385 and into San Francisco – an early evening journey we weren’t looking forward to as we had decided to change hotels just for this one last night and go from Japan Town to Union Square right in the heart of the city.

As it happened it wasn’t too bad and we found our hotel, parked the car in a parking garage just round the corner and checked in in time to listen to the last knockings of a jazz gig (who finishes jazz at nine pm?) and eat at the highly rated hotel restaurant, the Burritt Room. It was pretty good too even if the service le a little to be desired from a rather bossy maitresse d’.