2015 was a hard year. Most of our travelling was confined to trips between home and Guy’s or St Thomas’ Hospital for us both and for me from home to the office we took in Bromley because of a long and difficult English language teaching video project that needed a base other than our home office. But between surgery, courses of chemotherapy and client demands we did manage to grab a week in Cornwall and two weeks in southern Spain.

The Cornish trip was supposed to celebrate the delivery of the big ELT project but the client delayed completion with yet more changes and so the relief we should have both felt was not as complete as we’d hoped.

However this was to be a calm holiday not the usual Raggett itinerary k, b and scramble so we broke the journey down by staying at the Keep in Yeovil in which we had a split-level room in the eponymous tower. It was a Sunday so dining options were limited but the local pub did us fine. Next morning we visited the lovely Forde Abbey near Chard. A smallish property with gardens, parkland and an extensive garden centre where we resisted the temptation to buy as the poor plants would have struggled in the boot for the next six days.

Then it was on down the A303,  A30 and A391 to St Austell and the Cornwall Hotel and Spa.  Fortunately our journey passed without the traffic jams we both recalled with horror from our earlier lives trying to holiday in the west country. The hotel has an old manor house and then newly-built lodge style accommodation up the hill behind it, a good pool and spa facilities. On Tuesday we decided to take a trip down to Mevagissey and given unseasonable weather for England in August we decided to take a boat trip along the coast for an hour. 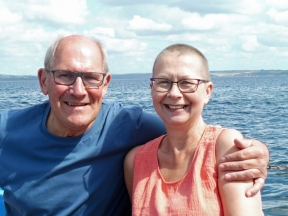 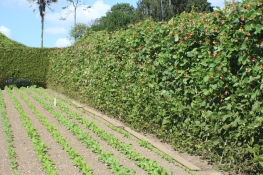 We then had a crab lunch at the Crown in St Ewe on our way to an afternoon at the Lost Gardens of Heligan. These have changed a lot since our last visit many years ago and gave us beyond-our-suburban-station plans for the runner beans! The weather reverted to type and we got a quick soaking before we left.

The next day we went to Newquay to spend the day with Dee’s Auntie Joyce and Thursday went to the Eden Project where we were glad of the domes to protect us from the unremitting drizzle interspersed with heavy showers. It was interesting to move through the different climate zones and see the changes in vegetation. Continuing our regal pub progress we went to the King’s Arms in Luxulyan for a late lunch and then back to the hotel for a swim and a massage.

Friday was so awful we just stayed in and swam and read and took a taxi to Austell’s the best rated local eatery for dinner which was fine. Saturday was a little better so we ventured to the Cornish Market World to look for interesting antiques (in vain) and then on into Charlestown for a further saunter round craft shops and galleries before lunch. And of course to explore the Georgian harbour much featured in Poldark and Hornblower and ages ago The Onedin Line. We then drove east to have a look at Fowey but there was absolutely nowhere to park – not even a blue badge spot – so we drove up river and quite by chance hit upon what we were sure would become a really splendid country house hotel Trenython Manor. It was in mid-refurb but a friendly manager offered to show us around. Built by Mussolini in the 1870s as a thank you to a local Colonel Peard, it then became the Bishop’s Palace for Truro and a Great Western Railway convalescent home. It was really tucked away up a narrow lane when you suddenly come across this massive portico. It looked as if it would be a fun retreat once they had finished all the facilities. We went back to Charlestown later on for dinner at Wreckers a fun seafood restaurant down by the harbour.

We left on Sunday under a bit of another kind of cloud – we were about to set off for a drive as the rain had stopped being torrential when reception called to say that there was still luggage in our room. I’d got the dates wrong and thought we were driving back on Monday but in fact we had a reservation at The Hollies in Martock for Sunday night again breaking the journey half way. So a scurrying pack and rapid departure ensued and we hit the road for Martock. 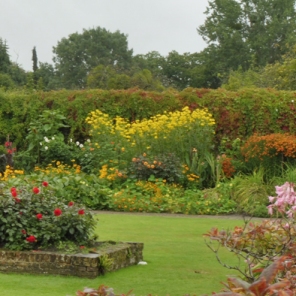 On the Monday morning we paid a damp visit to Barrington Court a National Trust property with its long herbaceous borders and colour coordinated gardens where we would have lingered longer but for the rain. The house itself was fascinating having been restored with wood panelling and floorboards salvaged from all over the place in the 1920s. Its impressive Long Gallery and other rooms had recently been used for filming Wolf Hall along with many other NT properties. So our restful Cornish break passed rather damply into the blog and we headed back for London and more editing for me and a period of uncertainty for Dee.