Breakfast and packing accomplished, the SatNav lady asked me politely if I wanted to avoid toll roads. I’m in no rush, many motorways are boring so I elected to avoid them. There were a few tricky sections on the NII south from Girona as they convert it into an autovia – the A2. I’m not sure how that will go down as it’s pretty well parallel to the AP7 in which the P stands for Peatge or pay. It’s a commercially operated 900 kilometre toll road that goes the length of the Spanish Mediterranean coast from the French border to Vera in Andalusia. Now there are already free to use sections around the major cities as part of the deal between government and contractors but it’s an interesting point here.

It then heads off to the coast and I have wonderful sea views and holiday apartment blocks all the way down to Mataro where we cut inland to bypass Barcelona to the west, passing the Circuit de Catalunya where the Spanish Grand Prix will be held a week on Sunday. I’m very glad at this point that she seems to know where she’s going because there are some sections that would have had me asking my navigator to reach for the atlas. However we pop out the other side of Barcelona with signs to Tarragona which is good since I know that’s on the way. Much of my route is on the N340 which must be incredibly long as I’m at kilometres in the 1100s. I later confirm that it’s the old Roman Via Augusta and starts in Cadiz and goes to Barcelona.

Its Roman nature explained an odd bifurcation of a twin track section round a stone archway the Arc de Bera – I couldn’t stop but, thanks to Wikimedia Commons, I can show you what I saw. It was a sunny day, progress was good until a saw a signpost for San Sadurni d’Anoia. I don’t know how many of you are familiar with the town but I’ve read it on lots of bottles of cava. San Sadurni is the capital of cava so a diversion seems essential. 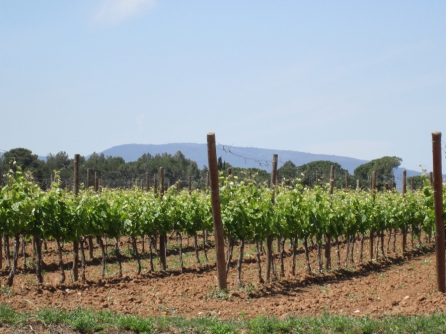 It is situated among field after field of very neat low level vines – I later learn that the spring pruning restricts each wine to two branches to increase quality at the expense of volume. As I enter the town the first winery I happen across is Juve y Camps the cava we enjoyed at Martin Berasategui’s last August. Sadly they only do tours by prior arrangement both here and at their winery at Espiells out in the fields. Maybe one year there might be a cava winery tour like the excellent Bilbao and Rioja one a few years back. However the best known and marketed of the cavas, Freixenet, did have a tour about to start so what was I to do? There’s a fine building dating from 1914 and then a huge new factory stretching off into the distance. One good thing is that it’s right next to the railway station so if you are in Barcelona and fancy a cava tour you can do it easily by train. 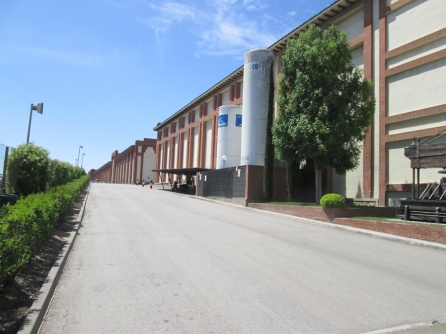 There was a good introductory video, much of the content of which our guide repeated. With vines destroyed by phylloxera, a couple of families, Ferrer and Sala decided to plant new vines and make a different kind of wine. The Ferrer’s farm was called La Freixenera so a brand was born. They used the methode champenoise but couldn’t call it champagne because of DOC rules. So because the wine was stored in ancient deep caves in the hillsides they called it cava. Freixenet was founded in 1914 and the king and queen came to mark their centenary three years ago. The tour takes in the original barrel hall and caves with racks of bottles for hand turning in the traditional style. However most of their production is now totally mechanised in the new factory building.

In my group I was good at naming the three grapes used in most cavas – perellada, x-arello and macabeo – too much time reading labels! But I failed miserably when it came to guessing their output in bottles per year. I thought millions because they are big. I guessed 10. The answer is a staggering 80 million bottles a year most of which go to Germany and the UK. After plunging to the depths of the cellars we were then conducted on a little train – spared a lot of up on this occasion – back to the tasting room. The Brut Nature was to my taste – very dry but with lots of fruit – but only one as I had to drive. 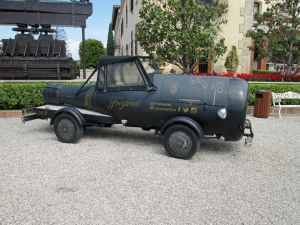 I was tempted to continue my journey in this but security wouldn’t let me near it.

So onwards to Tortosa and my next castle – a proper fortress this one. It’s 200 feet above the town – fine in the car with some good brake and clutch control but later on foot – that’s a lot of steps and all up. Some of my readers don’t do up and I think I might abandon it soon. Boy did the ticker pump! Yes, I know it’s good for me! When Dee and I first (and last) came here, we checked in, had a swim and a shower, frocked up and walked down into town. It was and still is easy going down. We were amazed because everyone was dressed in medieval gear as part of a July fiesta. There were displays of contemporary crafts and I remember us spending a lot of time with a guy making chain mail – one craft I’m glad didn’t come home.

It’s quieter today but I have an explore, come across this beautiful modernisme example with fabulous plaster work and then trek back up and scribble this from my balcony with views of the mountains to one side and a courtyard with bouganvillaea and the Ebro to the other.

One thing has become clear – I love to travel and explore new places. It’s sad when I can’t share them immediately, but thanks for helping. Good weather promised again for tomorrow so it might just be a day by the pool and nothing to blog about. We’ll see.