On the way south through Zamora province there are fields of beans – chick peas and habones which are somewhere between broad and butter beans, big and tasty. We’ve run out of vines as the land gives way to cattle and pig rearing under the cork oaks whose acorns make the ham from around here so tasty. As it happens I’m on Route 66, Autovia A66 and it doesn’t feel much like our trip in Arizona and Nevada except for the amount of road kill. It’s a fairly empty motorway – why can’t the animals dodge better? Sight of the day – sorry still no stopping – comes just south of Salamanca where the road crests a slight incline and there are the Sierra de Gredos still covered in snow. The road passed Béjar and there were signs to La Covatilla ski resort. Then after another gentle climb – no hairpins or gear changes – there’s a sign for a pass at 1192 metres above sea level. These really are high plains in the west of Spain – the film title I borrowed wasn’t actually one of those spaghettis shot in Tabernas in Almeria province. As the road continued my attention was drawn to a stunning piece of music that was totally unfamiliar. I’d enjoyed the company of Catalunya Musica until halfway across Aragon and had then managed to retune to RTVE’s classical station. That’s the national broadcaster – BBC equivalent. I caught a bit of the announcement that it had Anne Sofie van Otter and the Swedish Symphony orchestra. I later traced it to be Wilhelm Stenhammar’s Song: a Cantata in two parts. I’m listening to it now on the RTVE podcast and it’s even better without car noise.

The A66 progresses into Extramadura which is the most famous region for Bellota ham but I was very surprised by the number of newly planted fields of vines and of vines planted as infill between rows of olive trees. I stopped for a coffee and mentioned my surprise to be told that the whole area had been revitalised in 1999 when Extramadura finally got its own denominacion DO Ribera del Guadiana so quality and prices had risen and farmers were encouraged to plant more vines. It was a hesitant conversation given my shaky command of the language but informative. Most of the new vines are in Badajoz province at the east end of which, now on the N432, I enter Cordoba where the only planting to be seen throughout the whole province is olives with the exception of a few grapes around Montilla south of the capital and in – it seems – a dozen other villages where the wines are classified as Montilla-Moriles and have a striking resemblance to sherries and a similar variety from fino to the sweet Pedro Ximenez. I have occasionally taken a sip of fino from a bottle labelled CB Alvear only later to appreciate that it’s a Montilla not a sherry.

So I arrive in Rute just after three which seems like a good time for lunch before shopping. I recall that nice restaurant and bar we used to go to – Venegas, just up the road from Mercadona where my shopping is planned. So I go in, order a beer and ask what they have as tapas or small raciones and lo and behold they have carillitas de cerdo. These are pigs’ cheeks and became one of Dee’s favourite dishes. Coming from beside that large amount of bone the meat is really tasty and tender. These were served in a sauce with almonds. And how appropriate that he should be watching over me from the counter.

A week’s shopping completed I then drove on through Iznajar and turned right along to La Parilla, right on the border of Cordoba and Malaga provinces. The last part of the journey was a bit hazy and I thought I might be tired or my cataracts were getting worse only to realise that insect spatter had nearly obscured the windscreen. I’ll give it a wash tomorrow.

The house is still as lovely and welcoming as I remember. 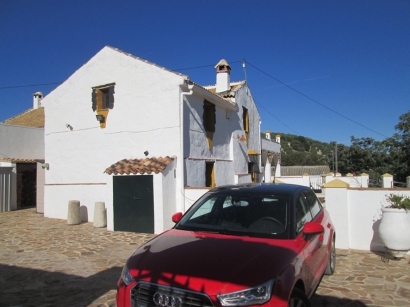 There’s a bit of noise from the olive oil cooperative in the village but otherwise just the birds and the rustle of a light breeze in the trees.

Always loved the lone pine above the olives

I’m unpacked, a week’s washing is on, finished and out to dry and writer’s corner has been established and occupied in preparation for the real task to begin tomorrow.

Oh and the pool area still looks attractive but the sun’s gone off it now and I’ve been busy. And horror – I have to cook for myself tonight!