Next morning we had a harbour cruise booked which would take us out to the Golden Gate Bridge around Alcatraz Island and under the Bay Bridge. The weather was not great – the one downside of this fabulous city – and as we arrived at the Golden Gate Bridge the announcer told us that the audio commentary system was shot and we were going back to the pier and would get a refund or a free ticket for another trip. Well we’d seen San Francisco from the water, were off out of town tomorrow, so we took the refund. However that took two hours of queuing, being sent back to the retailer we’d purchased our tickets from and then to their head office another couple of hours had gone by.

Fortunately the office was right by the Buena Vista Café which proved an ideal place for lunch. We shared a table with a family from Hawaii and shared their experiences of San Francisco, Las Vegas and LA but didn’t join them in the house speciality of Irish coffees which were prepared with real flair by the aged bartender.

From here we took two buses to the Golden Gate Park to visit the Japanese Tea Garden we’d read about. Bus connections were good, we got off at the stop that seemed nearest to the area of the park we needed. However our schematic city plan didn’t have all the roads and after half an hour walking alongside a scary freeway which bisects the park, we found a helpful group of students who fired up their smartphones and pointed us in the right direction.

It was well worth persevering and a reminder of the Japanese gardens in Kanazawa and Okayama we had visited last year, albeit on a much more compact scale. Pagoda, lakes and fountains, lanterns, buddhas and bridges gave it an authentic feel. It’s very popular for photo shoots as we saw both Indian and oriental themed models with their attendant crews. We concluded our visit with a cup of tea – well it is the Japanese Tea Garden – and some excellent mochi cakes. This was another delicacy that we had barely tasted in Japan neither of us being great cake or pudding people. 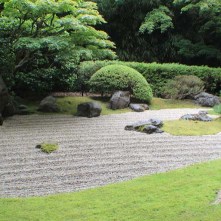 The Golden Gate Park and the Presidio are both enormous open spaces and from the tea garden we found a shorter route to a bus stop for our return to the hotel. We had a wander about Japan Town and retrieved the car from the car park to find a free meter space for tomorrow’s early departure for Yosemite. It was right outside the Japan Cultural Centre and what used to be the original YWCA hostel for the first Japanese women immigrants to San Francisco – known as Issei. What with our visit to the Japanese American Museum in LA we were beginning to appreciate the many connection between our lands of travel last year and this. 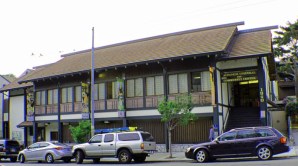 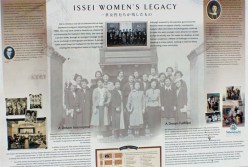 We decided to dine close to the hotel in a highly web-recommended Thai restaurant called Jitlada. It lived up to its reputation, was small but pleasant, service was friendly and efficient and the food was of such taste and quality that I’m prepared to believe one poster’s claim that it’s ‘the best Thai food in the city’. And that’s what you have to call it The City.

I learned from a parking attendant that it is very uncool to refer to the place as the usual slang terms Frisco or San Fran. Rather the locals like the full San Francisco – with emphasis on the penultimate syllable a l’español – or The City.