It was a splendid warm week with a few visits to the pool purely to stimulate the thought processes of course. I sat diligently in writer’s corner in the shade and have achieved what I hoped for – enough written down that it has its own momentum now and writing a chapter now and then among other commitments will be OK. If any of it is any good that is,

Sunday was a dull cloudy, Essex beat Hampshire by an innings and lots and Watford lost 5-0. The only upside was it was my daughter’s birthday.  So Monday was time to set off after my stay at Cortijo Alto. It is so peaceful except when the farmers start spraying the olive groves at 6 am. Still it got me on the road in short order. My excitement today was twofold. I would virtually complete a circular tour of Spain being in Valencia only 100 km from Tortosa. Secondly thanks to the kind proprietors I was going to meet ‘The Hornet’ an olive tree my daughter and the family gave me for Christmas. I had a certificate and have already sampled some of its excellent first cold press extra virgin Arbequina oil. Now I was going to hug my tree!

I left the house and set off eastwards along the A92 autovia, pausing for breakfast near Granada with a fine view of the Sierra Nevada, still living up to their name. I came off at a junction signed Huercal-Overa, the town nearest to my tree but SatNav was not happy as we did some N roads with a few trucks making progress a little slower. I soon arrived and found the original San Francisco deep in the heart of Almeria. We had agreed I’d find my way to Olivas Querencia by amazing good luck or not at all so Angela kindly came to find me – the red Audi and a tall bald bloke are a bit of a give-away.

Angela and her husband Willem (yes, he’s Dutch) have owned Querencia since 2010. They bought a lovely house, a big farm and 22,000 olive trees.

They’ve made a brilliant fist of sorting the place out and have achieved coveted status as first cold press virgin olive oil with International Olive Council approval which means a lot of tasting by people in Jaen,  the capital of olive oil – one might say the Vatican of olive oil such is the mystery that surrounds it. Oh and it’s pretty tasty too like less fatty butter with added sunshine. And of course you’ll live longer.

We shared stories and I was treated to a fabulous unexpected impromptu lunch before going to visit the trees. Where I’ve been staying the olive trees are probably 100+ years old. At Querencia they are 10. I’m used to multi-trunk gnarled old things, these are beautiful single trunk olives neatly trimmed and already showing good olive production after blooming. But no hugging in case unwanted pruning took place! 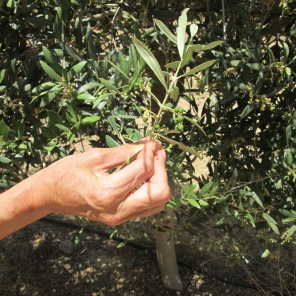 Angela and Willem find The Hornet

Come on you Hornet!

It’s going to be a good year. FACT. Isn’t it great when something so serendipitous works out so well. Hey, I even played with their dogs! We will keep in touch and one of Fuzz’s yellow wristbands will be The Hornet’s identifier in the future.

But I had to be in Valencia and olive trees needed pruning and tidying up – sadly yellow leaves are a bad sign and have to be pulled off. So I got back onto the A7 Autovia del Mediterraneo which should take me straight to Valencia in about four hours. I guess it must have been my cheapskate settings at the start that say “Avoid Tolls” but we veered off round Alicante north towards Albacete and Madrid and then picked up the A31 into Valencia from the west.  My circle was rapidly becoming a capital G. It was fascinating as I drove through Spain’s granite and marble supply zone – every other building alongside the road proclaimed quality stone. It was a bit filled with mountain passes too – not as big as the 1379 metres  in Granada but at Lorca you top a rise a see the polythene plains of Murcia – I hope things have picked up after the disastrous rains earlier in the year. And later you come over another pass as the road turns into the A35 and there is the green plain of Valencia with fruit of every kind, then orange trees and then rice.

It takes me two attempts to find the hotel as SatNav lady has no truck with No Entry signs exhorting me repeatedly to turn left where it’s prohibited. I got here, showered and changed and went walk about in the old part of this fabulous city, remembering that when we were last here the Town Hall Square was an ice rink.

I went to the amazing Mercado de Colon, redolent of Victoria in Cordoba and San Miguel in Madrid and checked out a few bars where we’d been before including some great ham at one near the Hospes de Mar hotel we’d stayed at in 2015, took a light dinner in a nearby tapas bar and retired to post this. Last day tomorrow and fully back into the swing with a meeting about the Watford Community Trust Anniversary book on Wednesday.

One thought on “Closing the circle (or G)”