This will be my first effort from a lovely iPad mini my son and daughter in law gave me for my birthday. So no pics till I get home as I haven’t yet got an SD card to iPad reader and took photos on camera not on this – doh! (Pictures since added to later blogs – ed.)

In a number of messages on Christmas Day, there might have been the hint of a smug smirk  as Rome was bathed in sun and blue skies. Yesterday was good too but today saw me return tail between extremely soggy legs, wet through to my underpants – and no it wasn’t aged incontinence but penetration. I had booked a ‘skip the line’ tour of the Vatican Museums and Sistine Chapel. Well it might take less time to get in than if you start from scratch but we still shuffled along for 35 minutes, It drizzled a bit and I resisted the blandishments of brolly and poncho sellers. Then it rained, Brolly sellers like taxis had vanished, then there was thunder and hail. The TV later mentioned snow, trees down and traffic disruption. Showered, changed into dry clothes, fed and with the Milan clubs in extra time in the TIM cup semis – and with a nice Sangiovese = it all seems quite amusing.

It all started so well – except for Saturday in Brighton – I got to Stansted easily, spent time in the lounge, boarded quickly and got to Ciampino 15 minutes early – cue applause from the passengers. First time for ages I’ve travelled with only hand luggage – thankfully I did have room for a second pair of trousers! I had decided on the adventurous route to the hotel, taxis for one seem extravagant somehow. So I got a shuttle bus to Rome’s Termini station where I can get a metro to Cornelia on the A line which is six minutes walk to the hotel. If you take the right exit. Whoa! Metro stations are huge with lengthy tunnels, Cornelia is deep too, Thirteen steps, three long escalators and then twenty more steps to the street. It’s dark when I emerge and for the second time in two days – Lewes on Saturday – I finally resort to Google maps that says I’m 16 minutes away not the six I was promised. I eventually ask at a gas station and am told it’s back down the street I was on. I stride off confidently when …

Pulling my wheeled bag and with camera bag over my shoulder, I am forced into a lay-by by a car marked Polizia and told to stop, Cop 1 showed me ID and said there had been a problem nearby with some Germans and a lone guy at night was suspicious. It may not have helped that I said – in German – that I was not Tedescho doch Englisch. They then wanted to see my passport, asked if I had money and I showed them my wallet with pounds in it still. They then asked if I had euros as without local currency I could be taken in as a vagrant. I did have one of Dee’s highly organised purses with euros that I was going to swap with the sterling in my wallet later. They counted it, agreed I was possessed of suitable funds, They showed me the way to the elusive hotel and only when I’d checked in and unpacked that I realised they’d filched 50 euros. Short for Christmas present money I suppose, underpaid state employees perhaps and of course, after the journey and location problems I was maybe not as alert as I should have been. Lesson learned. And btw Milan 1-0 won AET so Paul Goss won’t be pleased. 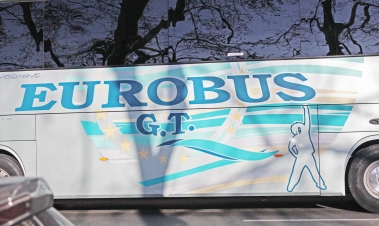 On the football theme I was pleased to see this bus parked near the entrance to the hotel. Well Graham Taylor did get Watford into Europe and maybe we’ll need another Eurobus one of these days and we can dedicate it to his memory.