Christmas Day began in tears as I opened the one present I had brought with me – dedicating the name of a star to Dee from my daughter and her family. I shared that on Facebook to a phenomenally large and positive response. After breakfast I skype Tom and Caroline in Hong Kong – more tears but lots of laughter too.

Then as the morning progressed it was time to head for St Peter’s Square to see the pope do his Christmas message. The crowd was huge but perhaps not as big as his Easter performance. I did manage to see him through a 300mm lens (600 would have been perfect) and seeing people drop to their knees in prayer and then applaud him like a rock star was quite an experience.

I then went back to the metro and went to Spagna to see the Spanish steps and have my first proper coffee – 95 cents for a good shot of strong espresso. Excellent preparation for the day ahead. In my trip schedule I had nothing booked for today and decided to discover Rome on foot. It was after all as I told too many people clear, blue, sunny and 14 degrees. Ideal for a stroll. I made my higgledy piggeldy way to the  Tiber and crossed into trendy Trastevere where there are book stalls and bad art lining the river promenade. 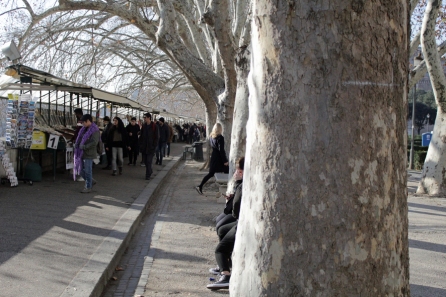 In many of the tourist hotspots there’s a smell of cellulose in the air as aerosol spray painting seems to be the big thing here. Time for a beer and to read a misdirected email from our friend Erika in Boston who was in my thoughts for the trip as her father Bob who Dee and I got to meet both in the US and London wrote the definitive book about Bernini who not only designed St Peter’s Square but lots of Rome’s most famous fountains and sculptures. About six weeks ago she replied at length to mine but sent it to herself not me. 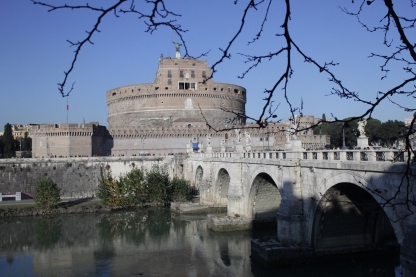 Her knowledge of and love for the city spurred on my feet as I wandered further down the river swapping banks by the huge Castel San Angelo and on down the left bank to the Jewish quarter, through to the Capitoline Hill with the huge Victor Emanuele vanity project (I was told off by the guide the next day – it was not just for him but to commemorate the reunification of Italy – right) which caused great controversy among Romans at the time. It destroyed a whole medieval neighbourhood, took loads of taxpayers money and was derided as ‘the wedding cake ’, ‘the false teeth’ and ‘the typewriter’. The massive equestrian statues confirm it as a vanity project for me. Beyond it I strolled along to get a first sight of the Forum and the Colosseum due for a guided tour tomorrow. This route was along  wide boulevard created when Mussolini order a whole medieval neighbourhood to be bulldozed for this prestige route – HS2 sound familiar?

My final saunter was the length of the Via Corso which goes straight as a die (Roman roads again!) north to the Piazza del Popolo. One thing I noticed on my walk was the frequent presence of the military with armoured vehicles and gun-toting personal at the entrance to every square.   What had been surprising was how many shops were open and how many people were shopping.

Christmas Day is not the biggest deal here – or anywhere else really except the UK I suppose. Things were beginning to close up and the metro stopped at 21:00 today so I made my way back to the hotel choosing the correct exit and arriving within the six minutes promised and with no police intervention.

I have to say that after eight hours of mostly continuous walking my ancient feet did feel they’d done their time. So to my room for a slightly mad skype with the Addison family up in Manchester for the festivities. The hotel’s main restaurant provided some interesting fruit combinations I hadn’t had before but which worked really well. My starter was smoked salmon served with blueberries and rocket and my main was steak with cantaloupe melon and rosemary potatoes both extremely tasty and helped down with a Sicilian Nero d’Avolo. And so to bed exhausted.

One thought on “When in Rome …”