Boxing Day saw me leaving the hotel bright and early to get the metro to Colisseo which meant a change at Termini, the only point where the two lines cross. I thought some of the tube interchanges in London involved quite a few steps but it took more than five minutes to get from one platform to the other – maybe there was a shorter route for the locals but Termini reminded me a bit of the subway in Japan where you are tempted from your journey by a plethora of retail opportunities. The tour party assembled just outside the metro station with a clear view of the Colisseum which is absolutely massive and breathtaking – and most of it is missing! Start time 09:45 for a prompt ten o’clock entrance.

Into the arena
This was my first experience of paying in advance for a ‘skip the line’ tour. By the time we’d all assembled, been equipped with headsets and radios to catch our guide’s wise words we were already fifteen minutes after start time and after struggling through the groups entrance, airport type security and general faff we didn’t actually get into the Colisseum until twenty to eleven. We were a motley group on Americans from Iowa and Florida, an Iranian couple who vanished midway through and of course a family of six Chinese one of whom did her best to interpret for the others who lacked her command of English.

The structure is incredible and one has to remember that it would all have ben clad in marble. The Romans obviously gave us a lot but I couldn’t help relating current coverage of Qatar’s brutal methods of building prestigious stadia for the World Cup and what must have happened as this and other magnificent structures were built. Life is cheap in these circumstances. The rich must be glorified in the manner of their choosing. The other thing that was cheap was wood and as I’m reading Annie Proulx’s fabulous book Barkskins about the deforestation of New England to build British ships, homes for migrants and the displacement of the native Americans, I couldn’t help remarking that lack of respect for both life and natural resources is nothing new.

We leave for the next part of the trip, the Roman Forum. We wait for fifteen minutes at another security check because we’re two numbers short (the Iranians) and I suspect guide Emilia gets charged for any radios missing at the end as she seemed in a real panic about it.

We admire the Arch of Titus parts of which are well preserved and show him clearly bringing home the loot such as menorah from the sacking of Jerusalem. We had already been staggered by the arch of Constantine which sits between the Colisseum and the Forum across the Via Sacra which was the route for the religious to St Peter’s later on. What surprised me most about the Forum – you get blasé about 2000 year old objects in Rome – was the difference in levels.

It’s like a trifle or a layer cake with a difference of some 50 metres between the current excavated floor thought to be around 100 BC to the entrance to the Senate House built in 283 AD, The general explanation is floods and alluvial deposits from the Tiber and demolishing buildings for new edifices and leaving debris behind.

These bronze doors – apparently one of only three that weren’t melted down at some stage are high above the level we are now walking at.

The Forum was of course where Romans came to gossip, plot and make the laws – mostly done on Twitter today. Our trip has overrun so we miss the Palatine Hill and I exit up to the Capitoline and down into the Jewish quarter for a refreshing beer in Bar Toto a recommendation from another gift Jo sent with me, a leaflet with hints and tips on unusual things to do in Rome. This was a very relaxed local bar in a great people-watching location.

My next port of call was  the Galleria Doria Pamphili which guide books raved about. I found it easily, paid my fee (no discounts for the elderly) and entered this amazing palace. It had a great courtyard, fine staircases and then room after room of overhung galleries. By this I mean large paintings exhibited three high on walls about 5-8 metres tall giving you severe neck ache. The main attraction of two important Caravaggios were absent on loan to Florence and apart from a superb Velazquez portrait of Innocent X next to Bernini’s bust of the same pope there was little to delight the eye. The Bernini-Velasquez juxtaposition was fascinating viewing but the rest I found dull in the extreme – room after room of gloomy Dutch landscapes. It smacked of art acquisition not art appreciation – so what else is new?

Crazy old man and the altar of peace

I walked through Piazza Navona passsing more Bernini fountains  – I especially liked his elephant supporting an obelisk on its howdah. – and I pass the church where I have a concert on Thursday night and on up the Tiber to the Ara Pacis museum. This had not been on my original agenda but I’m easily diverted. This is a glass box built recently to house the Altar of Peace of Augustus which was consecrated in 9 BC after Augustus had conquered France and Spain and people and animals had to be sacrificed to celebrate. It was buried under silt until 1939 and is in remarkable condition and a very beautiful structure despite its deadly purpose. 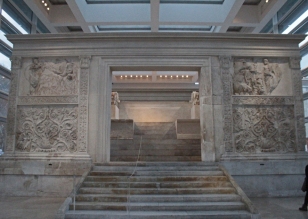 I walked back to the Piazza del Populo a massive square with people statues, legionnaires for selfies, bubble blowers and buskers – also a bar, and just beyond a convenient Metro stop on the A line which whisked me back to the hotel.

I went out again and found a very fine local restaurant, Joseph, with a great family atmosphere  and good simple food in my case a succulent veal chop, salad and fries.