On Thursday evening, work done for the day, Caroline asked the concierge for a recommendation for a typically Japanese restaurant. Motomachi Ioka proved exactly that. This is the menu, the only one available. While able to read most of it Caroline didn’t feel like spending the entire evening translating for us. So we watched as the sole, hard working chef prepared dishes and then indicated we’d like that too. In one case seeing him construct croquette-style patties with onion and potato Caroline asked what they were called to be told they were creama crockets so we had some. 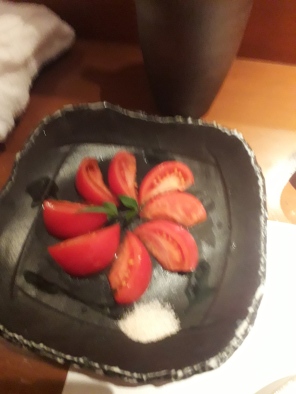 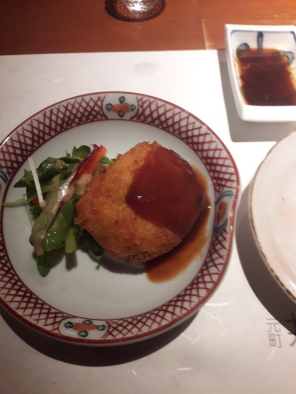 They were oishi and the chef appreciated our approval. After a few more dishes and glasses of sake we were ready for a good night’s sleep. Travel tiredness for some, work tiredness for others. Comfort for me – no trains tomorrow.

Dee and I had really enjoyed the Nunobiki Herb Garden on our visit five years ago and we were all happy to spend a morning riding the cable car to the top of the mountain and walking halfway down through the most marvellous variety of flowers and trees with panoramic views of Kobe harbour. The journey starts just outside Shin Kobe Station and the view down to the port over Ikutagawa Park with its pale cherries in full bloom and the river cascading through a culvert was a great start.

The herb garden is divided up into a number of themed areas and is pleasantly informative and a gently curving path wends its way downward. 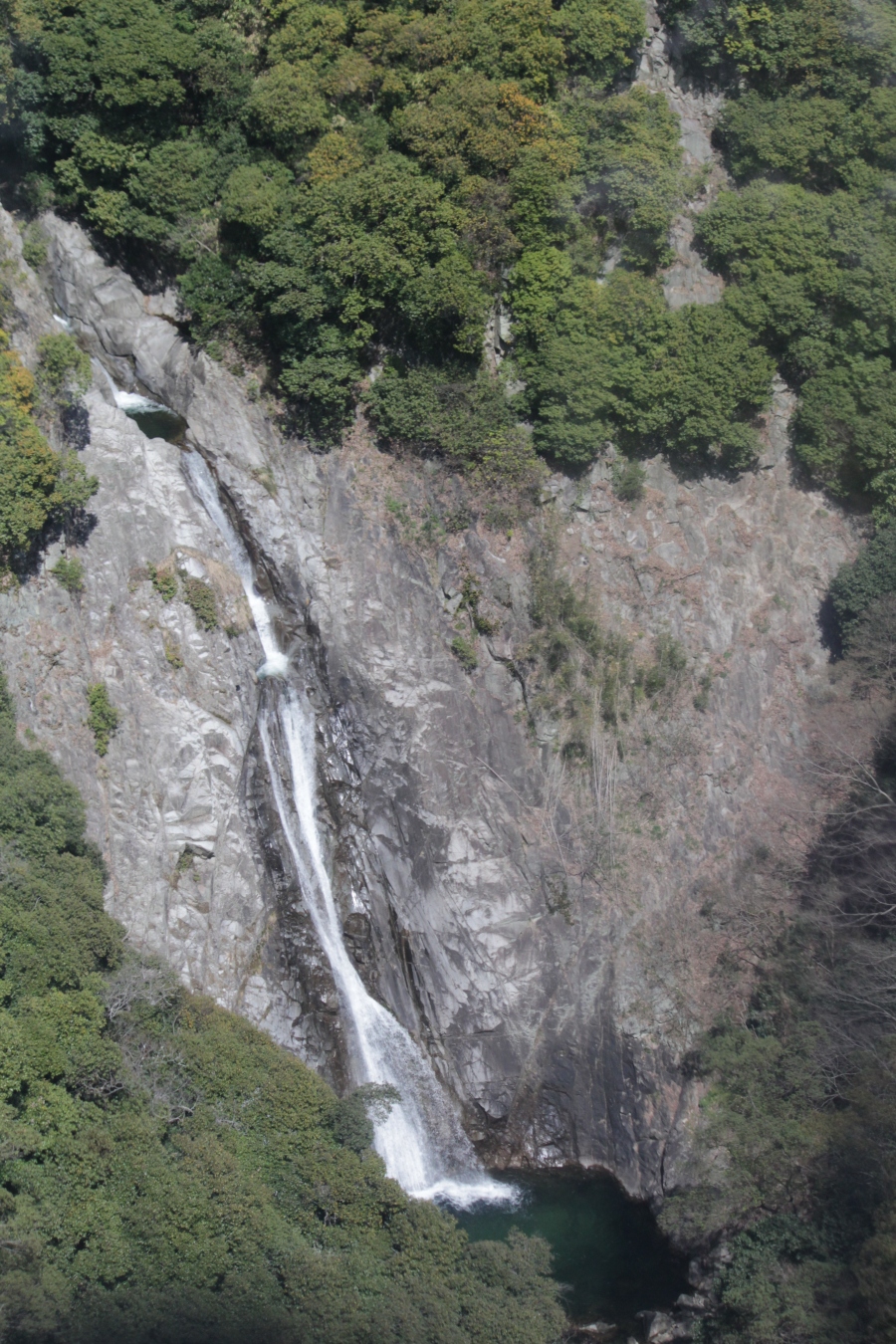 There’s also a chance to view the Nunobiki Falls which has been the subject of poems, paintings and prints as far back as the tenth century. It’s one of the top three ‘divine’ falls in Japan, whatever that means. We’ll see another on on Wednesday, the Kegon Falls north of Nikko. You can hike all the way back to Kobe but conveniently there’s a boarding point halfway down as well so we were whisked to the bottom in time to find lunch in the Crown Plaza’s Oriental City. We chose a lunch set which proved tasty enough but nap-inducing in quantity, so rather than walking to the station we took a taxi to our next destination, The Hakutsuru Sake Brewery Museum. As we arrived we were intrigued by the behaviour of three gardeners who appeared to be scouring the lawn with tweezers but unfortunately we couldn’t see what they were actually up to.

The museum gave a good explanation of the sake making process and included a tasting, during which Tom made a new friend. Pepper helpfully directed you towards purchasing the sake most suited to your tastes. 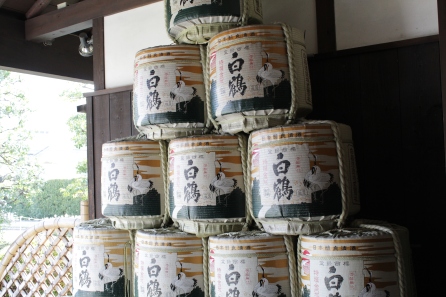 We did catch a train back into Sannonomiya, Kobe’s main railway station as I wanted to visit the earthquake memorial park at Higashi Yuenchi which we had seen only through pouring rain five years ago. Today it was warm and sunny and ideal. But we reached it through that very Japanese route a: massive underground retail mall under the station with numbered exits to go up to street level.
The Great Hanshin Earthquake of 1985 is the stimulus for a Murakami book After the Quake in which he weaves fictional stories of people affected by the earthquake in what was his original home town. Tom and Caroline left me snapping and walked back to the hotel.

I also walked back through the main (posh) shopping area of Kobe stopping at the small Sannomiya Shrine which is very small and simple and surrounded by high-end retail. Japan’s oldest shrine the Ikura is a short walk away. The Sannomiya, like most shrines I’ve been too somehow creates an area of calm amid the bustle. Apart from its history as a place of worship it bears a plaque commemorating the insult given by foreign sailors in 1868 which resulted in the Japanese Bizen troop commander firing at all foreigners and then committing seppuku, ritual suicide, because of the shame he’d brought on his people.

We decided just to walk back into the Motomachi area for dinner and pick a lively-looking locale for dinner. Again there was no menu in English but by asking for some tempura and enquiring whether they had gyoza, resulted in the chef putting gyoza fillings into the tempura batter rather than dumpling pastry and a delicious dish was invented just for us. This was a tiny bar where we suspect they rarely saw gaijin but were extremely welcoming and I apparently gained huge brownie points when I added a domo in front of arrigato to say thank you. It was what I was told was appropriate back on my first visit in 1979 and unsurprisingly is now considered very formal and polite. Well that’s me!

We rose early on Saturday and caught the train to Hiroshima which is only an hour away on the Nozomi Superexpress. We boarded the City Loop bus passing Hiroshima Castle, the Art Museum and alighted at the Atmic Bomb Memorial Museum where a series of excellent displays, video testimony from survivors and recovered artefacts make for an informative and reflective display. You do wonder how anyone could ever have taken such a decision knowing full well what the outcome would be. And then do it again in Nagasaki. And today we have chemical weapons in Syria and Salisbury, nuclear stockpiles only somewhat diminished and history’s lessons remain seemingly unlearned. 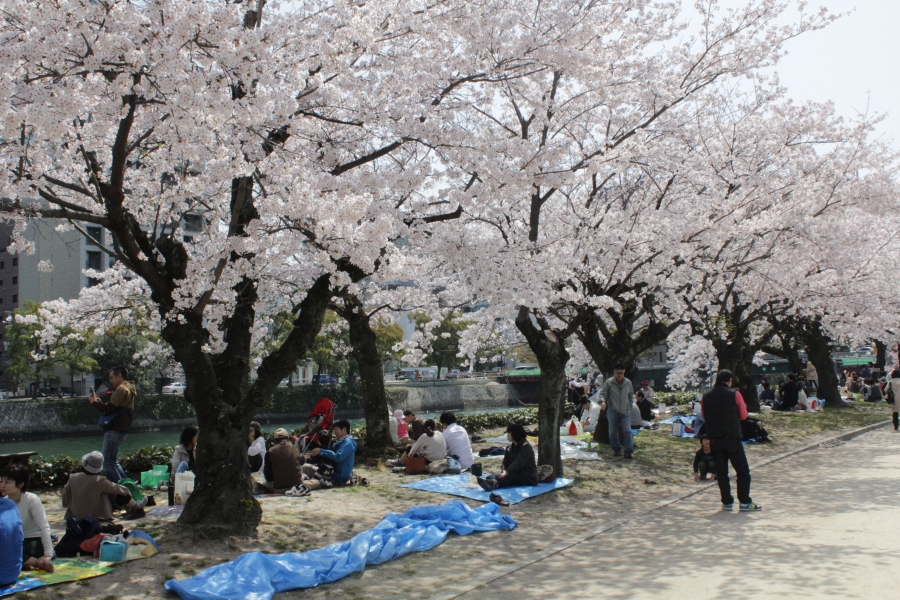 The peace park is one of Hiroshima’s most popular Hanami sites and the picnickers were out in full with blankets, bento boxes and selfie-sticks well to the fore.

There’s a very impressive subterranean hall where 140,000 tiles represent the number of A-Bomb victims and the central fountain 8:15 – the moment the bomb was dropped. A sombre space for reflection and remembrance.

We walked on into the town centre and found space in a traditional and very popular restaurant where we were show to a dining platform where I was expecting a hole under the table to accommodate legs but there was none. So being quite tall and unaccustomed to cross-legged dining we shuffled about uncomfortably until we spotted a group leaving a table with stools which would prove much more accommodating for Tom’s 6 foot 4 and my 6 foot 2 frames. So Tom as quickest of access was despatched to secure it while we struggled to join him and make it firmly ours. This did result in the next party to arrive being shown to our platform – something which the matron of the party regarded with some displeasure. Hey she was younger than me anyway and their limbs grow up able to contort in comfort. Sitting smugly enjoying our noodles and beer in pottery beakers, I realised that while I had picked up my camera bag in the scramble I hadn’t got my phone so I went across and asked politely if they’d mind looking for a mobiru around their platform. By pointing and holding my hand to my ear they understood and eventually fished it out to my great relief and embarrassment. However domo worked wonders again and we parted all smiles. 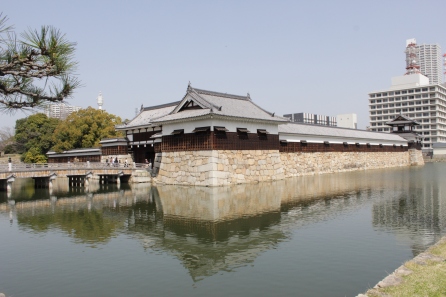 After lunch we walked to Hiroshima Castle a “faithful” replica rebuilt in 1958. It has an impressive moat and a shrine where I was able to add a stamp to the hon we had started in 2013. Sadly here they give you a cloakroom type counter and take it off behind curtains to do the calligraphy. I much prefer to watch them do it while you wait.

On our way to the castle tower we passed three dogs being taken for a carry,

The castle tower was quite tall and probably had great views but it looked like a lot of steps for an old chap with left leg sciatica problems – and Caroline’s not fond of heights so we admired from the ground. Probably just as well or we might have found ourselves like this.

We then moved on to the Sukkien Gardens which were a little disappointing compared to the great gardens until I read the sign on the way out which explains that the name means ‘shrunken view garden’ so it was always planned as a miniature example of the Japanese gardener’s art. It had many of the usual features and was popular with newly weds – or just people who rented a kimono and suit to dress up for the day,

It also had cherry blossom trees that combined different colours on the same tree. 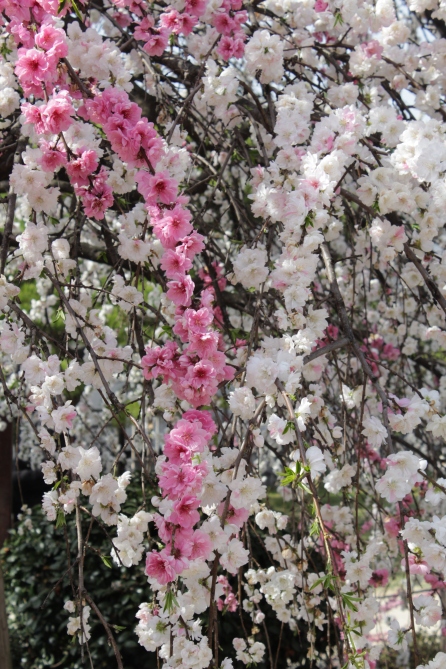 It rounded off an interesting day trip to a city completely rebuilt since the 1950s with wide boulevards and straight blocks.

The train whisked back to Kobe for a shower and change before going to a hotel-recommended shabu shabu restaurant. It was very smart and involved two shoe removals – one’s own and then their slippers before entering a tatami room with low tables and thank goodness holes for legs beneath. This cooking style involves boiling water at your table to which are added vegetables to make a broth into which you dip mushrooms, cabbage, carrots and of course Kobe beef which you then dip in ponzu or sesame sauces. 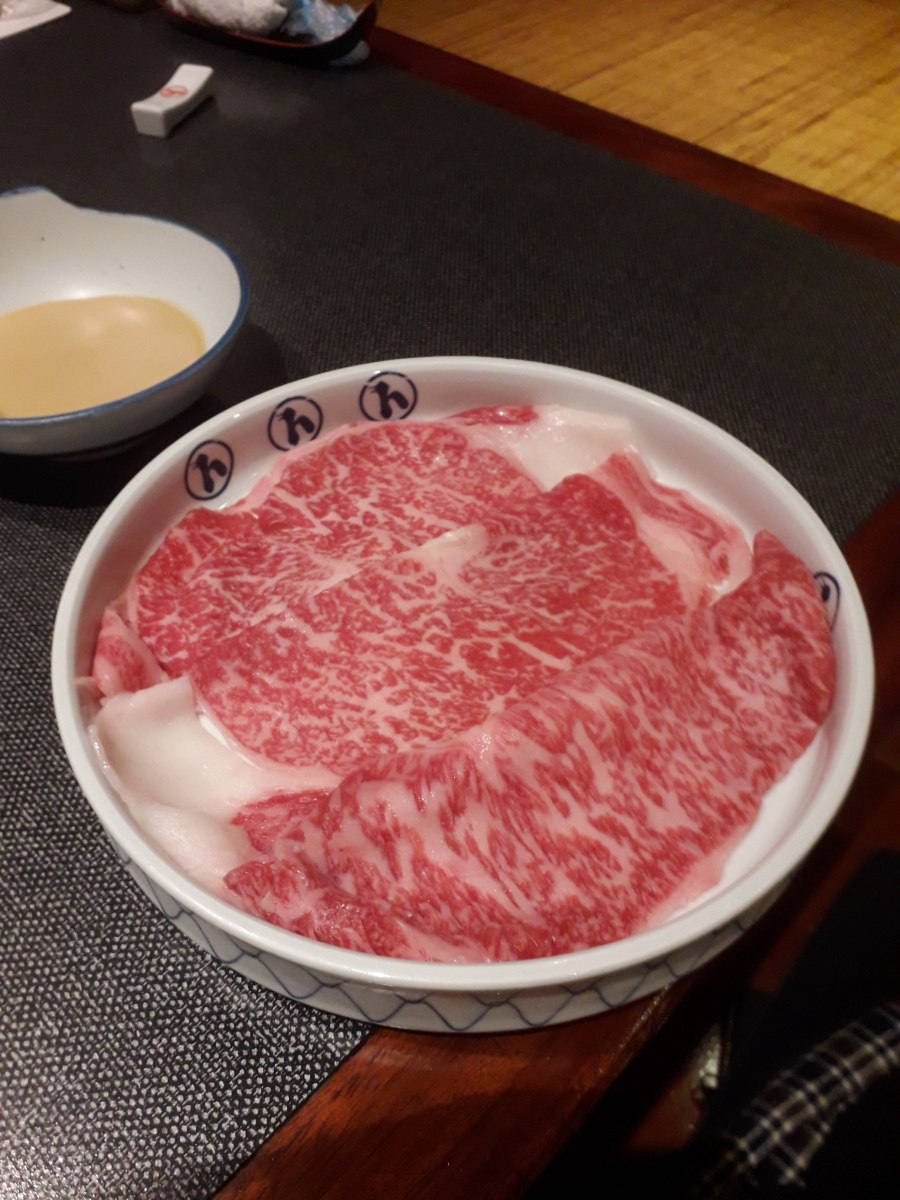 Truly delicious and something I had last done properly in 1979 as guests of the ministry of education. We thought the sake we’d selected a little sweet to start with but it went very well with the food.

When Dee and I were here we’d had an uproarious night with some young students in a Spanish tapas bar so as a contrast to the refined dining we’d just experienced we set off to find the Bar Mar, It was still there and as a result of Tom showing them a photograph from my blog of five years ago, we received a complimentary plate of serrano ham to go with our Tempranillo. Caroline revealed that in the last three days we’d walked thirty kilometres so an early-ish night and respite for tired legs was in order. I stupidly fired up Hornets Player and listened to a comfortable victory over Bournemouth at last – until extra time when that damned Defoe equalised. Angry sleep.

Caroline had researched brunch in Kobe so we headed out for the harbour front to a place in an old red brick warehouse nicely converted into restaurants and retail. There was a farmers market and a flea market in full swing as we passed. The food presentation was a little odd: huge sandwiches, my granola was served on toast with cream cheese and maple syrup and Tom consumed a huge ‘Full Aussie”. Back to the hotel to pack up, taxi to the station and just make the train back to Tokyo. There was terrible congestion in the drop off area and my driver couldn’t find anywhere to let me out. Then my ticket got refused by the automatic gate and I had to get it stamped at the window and rush up to the top of the escalator where the train and I made simultaneous appearances. I’m leaving travel arrangements to younger people in future. However I am hurtling back to Tokyo after a very pleasant trip down south.