Saturday dawned bright and warm and I set off to find a post office as I had bought some postcards to send to my grandchildren. I usually do when travelling and thought I would do so now they were back in the UK. The front desk handed me a map with three post offices circled so I chose the one nearest to the subway station I planned to use for my trip to the waterfront. Cards successfully posted, I headed for the nearby Namba Ninja shrine. We remarked before and with the family how it was always something of a surprise to find shrines down side streets in the midst of normal city life. This one was no exception and in Kyoto I’d looked out of my bedroom window onto this bijou rooftop shrine. 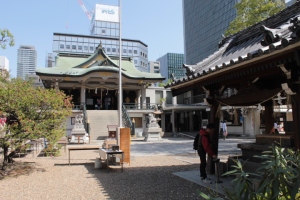 As with many, the Namba Ninja would be home to a flea market from 11 am, but I didn’t wait for that. I purified, donated and had my hon stamped and signed and then went for a coffee to start the day proper. Osaka subway is classified just like Tokyo’s with colour-coded lines and numbered stations so it was easy to get to Harborland where I wanted to see Tadao Ando’s Suntory Building. We’d admired his work on Naoshima Art Island and elsewhere on the previous trip. 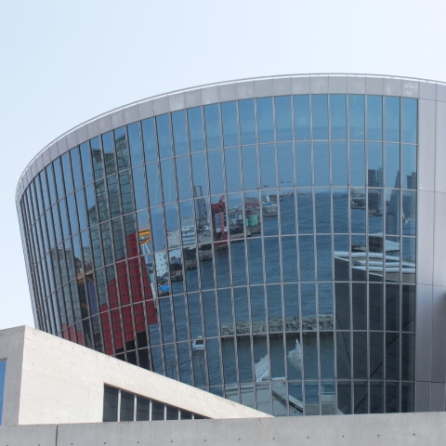 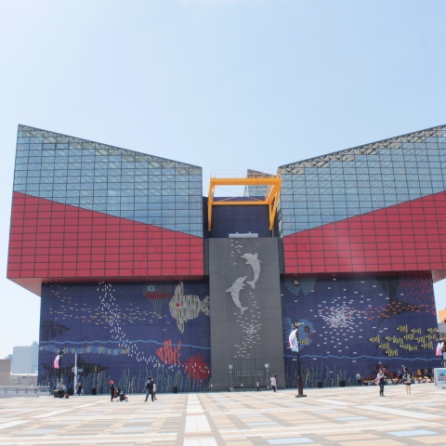 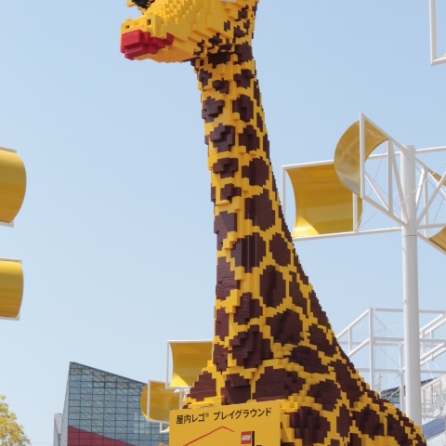 It’s an impressive piece with great reflective curves and a calm contrast to the rest of the area which houses Osaka Aquarium and Legoland in a series of rather more garish edifices. I’m just sorry the grandchildren missed the giant Lego giraffe! The Suntory building itself has an auditorium with an IMAX cinema, a gallery and eating area and of course a museum shop. The exhibition was of the work of an artist I confess I’d never heard of but who is apparently big in publishing and film in Japan Kiyoshi Nakashima. My one-day subway pass gave me a discount so why not? The first part was filled with increasingly fey and whimsical pieces obviously drawn with great skill and speed, given the vast number of works on display. It was always windy in his pictures and thet feature bears and other cuddly toys along with slogans such as ‘Cheer Up Japan’ and other encouragements for optimism. 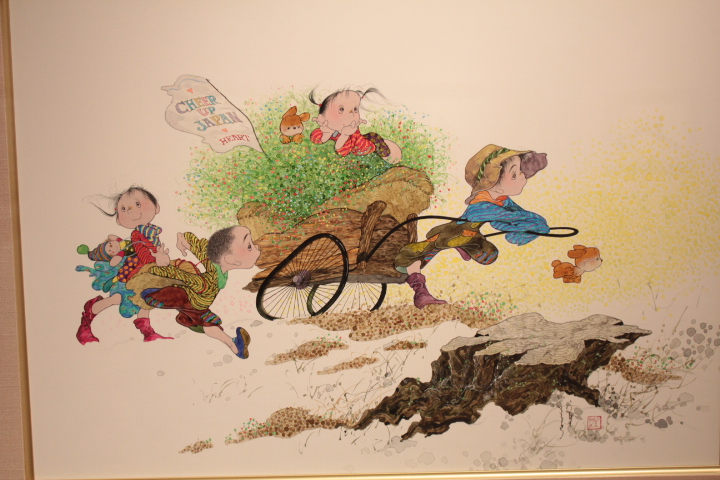 Then suddenly in another room were grotesque succumbs-like figures engaged in scenes of bloody torture and horror such that I even checked with an attendant that they were by the same artist.

I think even Bosch and Brueghel would have been shocked. I guess too many pretty children with their favourite toys can only go so far and your inner vision of hell needs an outlet. I can’t say I was moved to bring any prints home but I was glad I’d been. As I left a large school party was being lined up to enter the aquarium. Health and safety here has kids wearing hard hats. 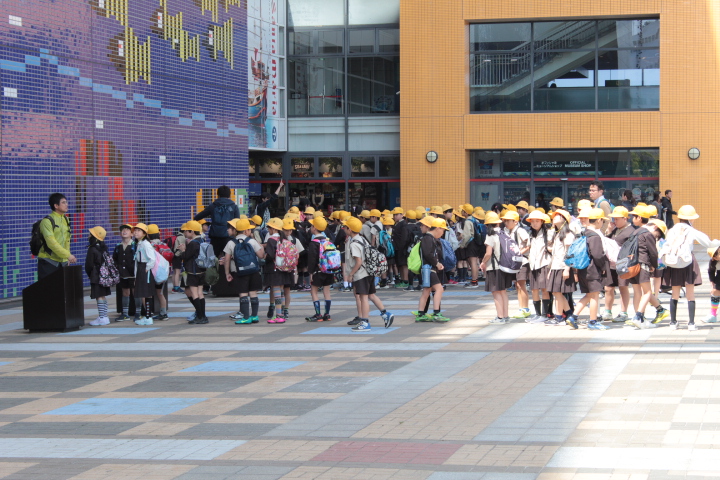 Next on the culture trail was a subway ride back to  the centre and a walk through the Nakano Rose Garden beside the canal we’d visited before – again not in flowering season – to the Museum of Oriental Ceramics. Sadly this had a special exhibition of Sevres of which I’ve seen a bit and am not a huge fan. However I had to agree that the modern factory is turning out some exciting pieces. My real delight was in the elegance and subtlety of some of the earliest oriental pieces from China, Korea and Japan. Sinuous shapes and simple glazes on some of the pots did make me want to open a case and secrete the odd one in my camera bag. 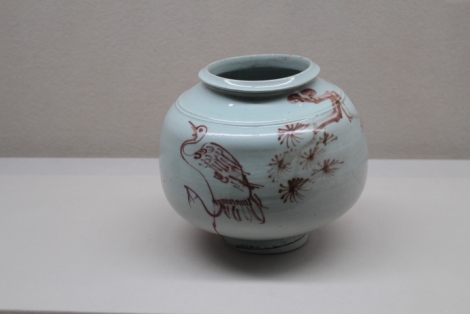 Just nearby overlooking the gardens was a restaurant that looked like it had beer and food so a brief stop had me engaging in diversionary hide and seek and silly face games with a ten-month old baby at the next table where mother and her friends thanked me effusively for entertaining him so that they could catch up. I then walked along to the National Art Museum and Science Museum, the amazing structure of which we’d admired before at a time when it was closed. What I hadn’t realised is that the steel carapace is the only part of the museum at street level, the actual galleries are in three basements. 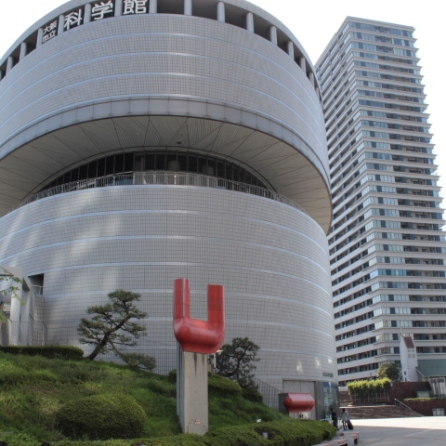 I had read of it excellent permanent collection of world and Japanese art and was eagerly looking forward to it. Damn and blast though. It’s forty years since it was established and they have a special anniversary exhibition of curators’ picks. Some were impressive, others less so. For my taste and time available there were far too many installations that involve 11 hours of video or a 90 minuets silent film that suddenly erupted into wails and screams. There were also lots of photo series many of which were well shot and framed but had whinge-inducing titles attached – too clever by three-quarters for me. However there was a nice Calder mobile and a fine Henry Moore. Am I turning patriotic?

We didn’t make Osaka Castle last time so I headed off there on the subway and was not disappointed. It had the Hokoku Jinja which provided me with my second hon stamp of the day before I walked up to the castle itself. 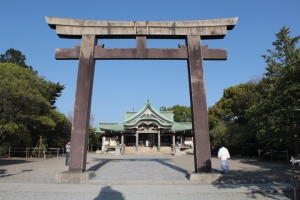 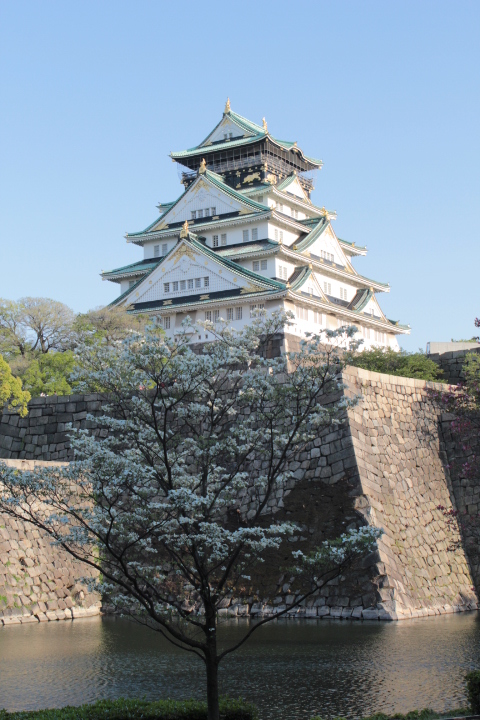 The first thing you see is a massive shopping mall in red brick in a strange warehouse building style.Sadly I was too late in the day to walk up to the top and I’m not sure the legs would have made it. There are lifts actually it seems and it’s a good museum I’m told later. This didn’t start out as a walking holiday but soon turned into one. For once I was able to leave the castle by a different route – not through the gift shop either. Instead I was able to walk down and cross the Okawa River and head for the subway at Temmabashi just as everyone was heading home from offices and shopping sprees. Complete chaos and very full trains but not quite needing pushers to get us all in.

Back at the hotel to put my feet up and plan the journey to Osaka’s Kansai Airport tomorrow morning, I idly turned on the TV to find the Hanshin Tigers playing the Yakult Swallows in Nishonomiya only 20 minutes away. If only I’d prepared better! But then there would be the dilemma of who to support. The Tigers are from this area where Murakami grew up but the Swallows’ home is the JIngu Stadium in Tokyo where he had his lightbulb moment about becoming a writer and where Dee and I attended a very cold game. I chickened out at 2-2 at the bottom of the ninth (Swallows nicked it 2-3 in the tenth) as hunger called and there are some good restaurants in Shinsaibashi where I was staying and there was another of those long malls with lots of competing choices. Given the memory of our successful night in Asakusa, teppanyaki won out and more fine Kobe beef was enjoyed.

It transpired that the best way to Kansai International was from Namba Station a short cab ride away. I could have caught a train but opted for the Airport Coach service which resulted in a fascinating journey through Osaka’s docks and harbour area most of it on reclaimed land and the airport itself on a specially built island in the bay. The industrial landscape fascinated me with old fashioned looking factories, a highly modern cruise terminal and massive distribution warehouses among the oil refineries. Great journey concluding with a massive bridge across to airport island. 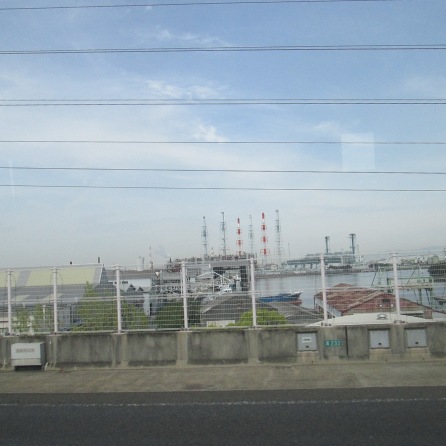 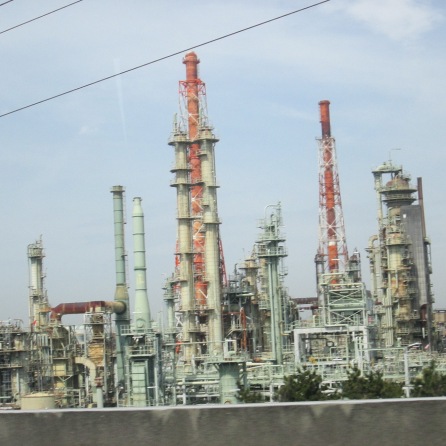 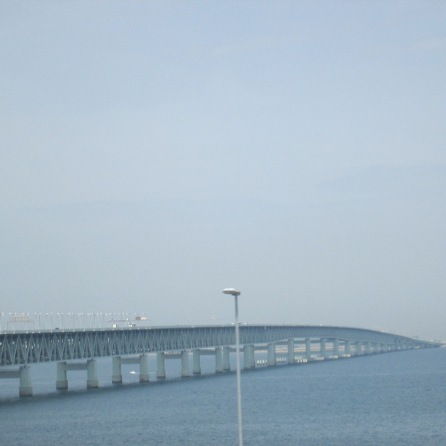 I had changed my name with JetStar for my flight to Singapore via Taipei so boarded fine and because of delays at take off with air traffic control in Taipei, had to scuttle through security to get back on the same speed-cleaned aircraft. So although I’ve technically been to Taiwan, I can’t tell you much about it except that as we came in to land there appeared to be many communist era China style buildings – maybe ideological differences don’t affect intrinsic architecture using available resources.