So my last day in Cuenca was meant to be about nothing – a quiet one and then I got a small two hour job to do – my fault I did say I’d pick up emails if urgent. So the morning passed and it wasn’t quite hot enough to go to the pool so given the verbiage was flowing I knocked out a short story for a collection I’ve planned alongside “the novel”. I’d written off the new town of Cuenca down the hill after driving through a few times but thought while I’m here I’d better walk down through the old town and see how it all pans out. It took about half an hour – all down – from the parador to the main shopping/drinking street. I had dinner planned so didn’t want much lunch so a beer and the freeby olives, nuts and crisps sufficed at a couple of bars and it was after four by now. The lower town does not have much to recommend it I’m afraid except for an enthusiastic balcony display commemorating Cuenca’s sunflowers and a little later the lovely strains from the practice rooms of the music academy with its lively (again) Corten steel sculpture.

The northern river Jucar had a bit more water than the Huecar on the parador side and there was a pleasant park and another incredibly modern church the cross of which probably doubles as a cellphone mast, impressive university buildings and a likely looking theatre. 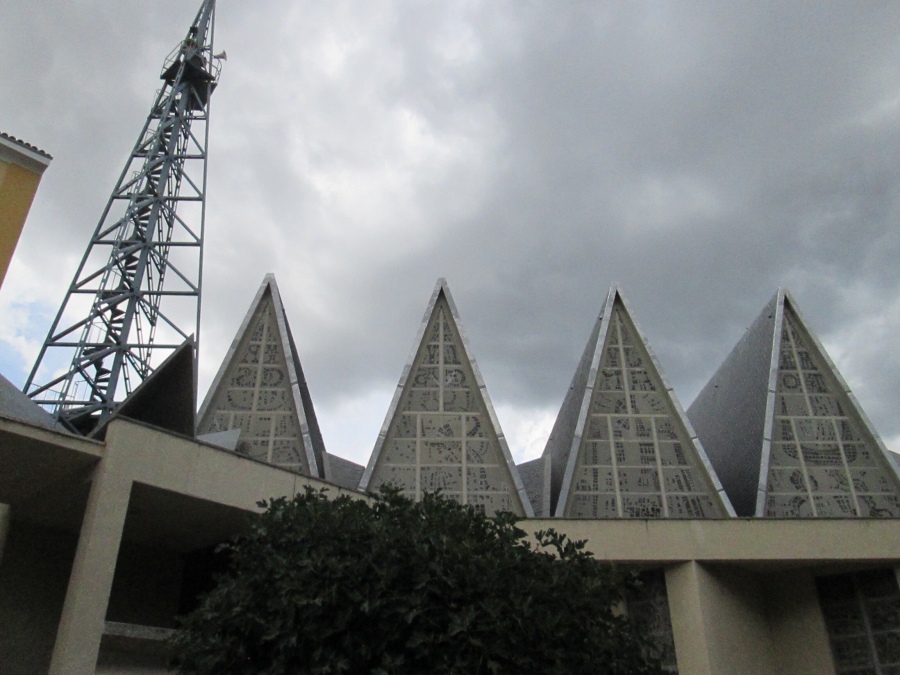 Do I walk back up or get a cab? Seems daft to not walk but it does prove quite steep and there’s more to come later. However the legs make it up beside the Huecar with its little weirs gurgling encouragement to the ancient limbs and I do get a different angle on the hanging houses and the bridge which on my way down I’d heard someone refusing to cross – I guess if you have a height phobia it would be very scary.

Back at the parador I shower and prepare for dinner at Cuenca’s one Michelin starred restaurant Raff San Pedro. Of course it’s up in the old town so the bones creak a bit but the menu makes pain soon forgotten. I explain that with old age I really only need a small amount so the patron suggests the Menu Gastro which has three small starters, a main fish or meat and ice cream. I go for that – and forgive me some have accused earlier blogs of being too full of food but this has to be told. First comes a small golf ball of ajo arriero cod and garlic mixed with potato and with a truffled exterior. Delicate notes of truffle and garlic very well balanced. Next is a wine glass of foamed yogurt with migas the local croutons and jellied extract of artichoke. The third is a wonderfully smooth salmorejo gazpacho’s thicker sister with cucumber and quail’s egg. The main was an old favourite carilleras pig’s cheeks where the meat is so tender because of lying against that great expanse of bone. Accompanied by a local Tempranillo my last day in Cuenca was a huge success and Spain beat Croatia 6-0 so there was happiness in the plaza as I wended my way back down to the parador.

Breakfast, pack and on to Madrid with an easy drive until the last section where the SatNav could not put me outside my hotel despite telling me I’d reached my destination. I had to go into a giant parking garage under Plaza de Independencia and find the hotel on foot with Google maps and then go and retrieve the car and park it in the hotel’s garage. It’s a modern boutique number quite unlike the rest of my trip but very pleasant and in Salamanca an area of the city I didn’t know much before. I do now. It’s very posh (of course) with lots of international and local specialist clothes, shoe and jewellery shops. What I did find was a Galician taberna for lunch which had steamed clams fresh in from A Coruna this morning – and they and the crisp Rias Baixas wine reminded me of our trip two years ago along the north and west coast starting in San Sebastian and ending up in Baiona. Fortified I wandered, keeping to the shady side of the street as it reached 36 degrees today – pleasing the locals as it had been over 40. I walked through areas unfamiliar and familiar, finding another local market on the way and ending up on the far west of the city by the Royal Palace. I sat in front of the Opera thinking one day it would be good to come here during the season and catch a performance. Likewise the Liceu in Barcelona. 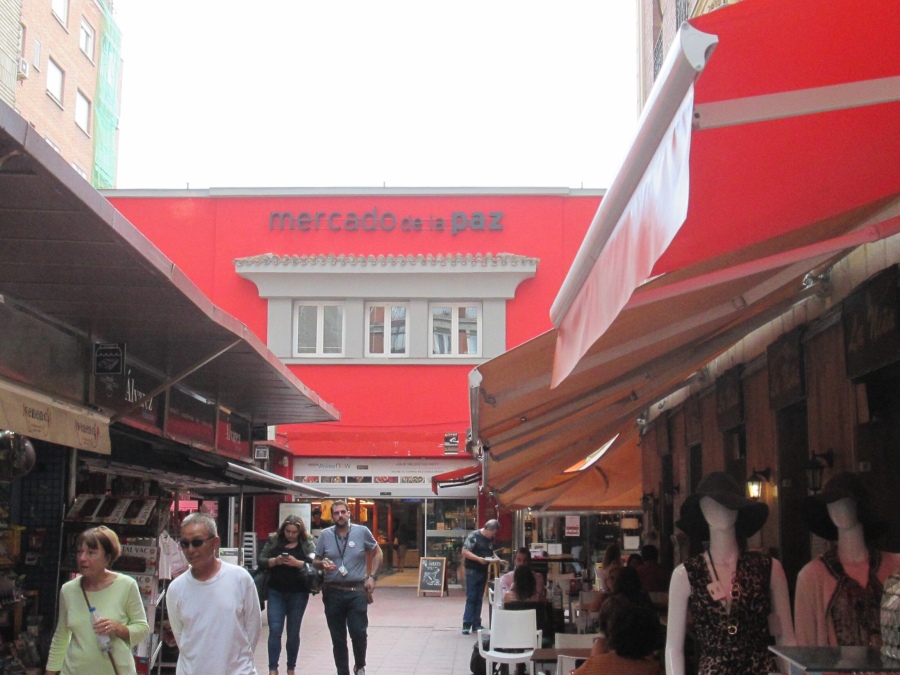 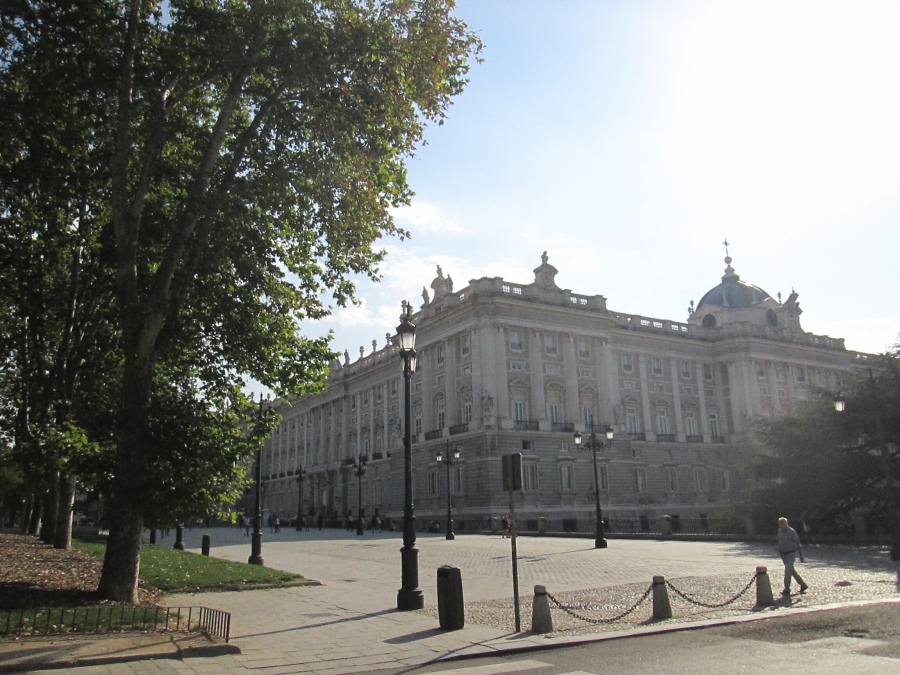 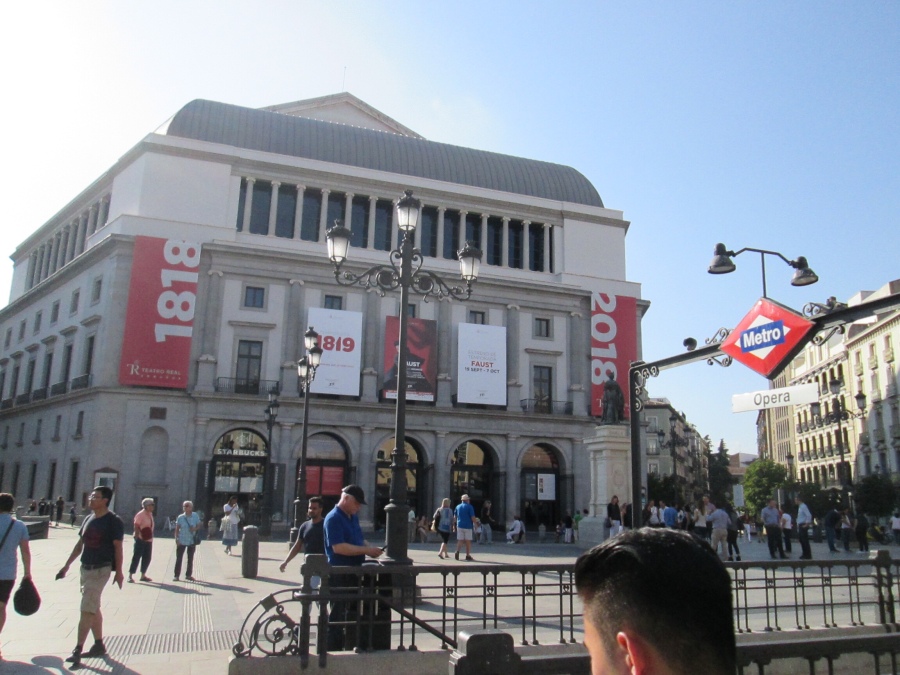 I had of course to go through Sol the very heart of Madrid and our favourite plaza Santa Ana before heading through the Retiro Gardens and back to the hotel on Alcala. My feet said enough and there’s a Mexican-Spanish fusion group playing live on the roof terrace tonight so it would be rude not to attend. Besides as I entered my room after an urgent beer in the bar I found this. Salud!

I’ve never been into to the FitBit step thing but today I did think it would be nice to know just how many steps – all as they say andando a pie.

One thought on “Much ado – mucho andando”